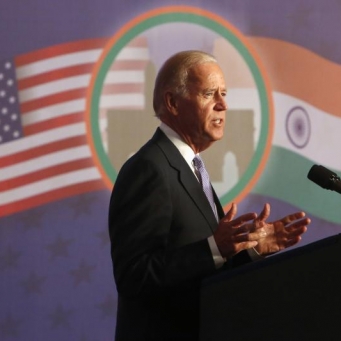 As a guest at the G-7 summit in the United Kingdom in June, Indian Prime Minister Narendra Modi addressed a special session on “open societies,” where he highlighted his country’s “civilizational commitment to democracy, freedom of thought, and liberty.” Modi’s remarks were laudable, as was India’s support for a G-7 joint statement reaffirming a “shared belief in open societies, democratic values and multilateralism.” Yet only months before, the democracy watchdog Freedom House had downgraded India from “free” to “partly free,” citing a “multiyear pattern” of “rising violence and discriminatory policies affecting the Muslim population and . . . a crackdown on expressions of dissent” under the Modi government.

But shoring up U.S. support for India’s democracy will be easier said than done. The Biden administration will need to put values back into the U.S.-Indian relationship without severing the strategic ties that have flourished over the past two decades. India has historically rejected foreign criticism of its domestic affairs, so Washington will not be able to use familiar diplomatic templates, such as a formal bilateral human rights dialogue, to reinforce democratic values, as it does with many other nations. Instead, it should pursue a reciprocal discussion with India, acknowledging that the United States has work of its own to do and underscoring the need for both nations to live up to their democratic values. It should also emphasize that further deterioration of India’s democracy could dampen domestic support in the United States for deeper bilateral relations. The Indian government may reject this approach as well, but Washington has a better chance of succeeding this way than by lecturing from on highe.

NATURAL ALLIES
Although it is not a formal treaty ally of the United States, India has become an increasingly important strategic partner over the last two decades. U.S. President Barack Obama’s administration designated India a “Major Defense Partner” in 2016, and U.S. President Donald Trump continued to deepen security ties during his administration. As a counterweight to China, India’s appeal is obvious: it is now the sixth-largest economy in the world, and it has one of the largest militaries by personnel. It is also a staunch defender of the principles of a free and open Indo-Pacific, in particular freedom of navigation and international rule of law.

India’s scale, its free and fair elections, and its long-standing commitment to the freedoms and protections enshrined in its liberal constitution have long made it an important part of the global democratic order, even if it sometimes falls short of its values. The Quadrilateral consultation, an informal gathering of democracies comprising Australia, India, Japan, and the United States, emerged in part because of the appeal of a partnership forged on the basis of shared democratic values and in part because of shared concerns about increasing Chinese aggression in the Indo-Pacific. If the major fault line of the twenty-first century is between authoritarianism and democracy, as Biden asserts, then forging common cause among like-minded democracies promises clear national security benefits.

But in recent years, the U.S.-Indian relationship has veered away from values. In particular, since Modi was reelected in 2019, his government has alarmed human rights advocates and democracy watchdogs by restricting freedom of expression and eroding protections for Indian Muslims. The Modi government abruptly repealed Kashmir’s traditional autonomy; rammed through a constitutional amendment that appeared to introduce a religious test for fast-track naturalization of persecuted religious minorities from Afghanistan, Bangladesh, and Pakistan; and cracked down on popular protests, including by disrupting access to the Internet.

India still enjoys broad bipartisan support in the United States—a 2020 Chicago Council survey showed similarly positive views among Democrats and Republicans of U.S. ties with India—but that support is built on the notion that the world’s oldest democracy and its largest democracy have an inherent affinity, a connection of “natural allies,” to quote former Indian Prime Minister Atal Bihari Vajpayee. However, mounting concern over the Modi government’s rights record could dampen those high levels of support. India has already attracted sharp U.S. criticism for its policies in Kashmir and its new citizenship law. And these events have surfaced partisan differences: a 2019 resolution in the U.S. House of Representatives to urge the Indian government to protect rights and religious freedoms garnered more than 60 cosponsors, almost entirely Democrats. Another outcome of India’s drift away from democracy could be a partisan split in U.S. support for the bilateral relationship—something that could eventually imperil it.

A TWO-WAY DIALOGUE
The Biden administration is seeking to put values back into the U.S.-Indian relationship. In his first call with Modi, the president underscored his “desire to defend democratic institutions and norms around the world” and called shared democratic values “the bedrock for the U.S.-India relationship.” Later, in testimony before the House Foreign Affairs Subcommittee on Asia and the Pacific, Dean Thompson, a senior State Department official, said the United States had “significant concerns” about Indian actions that were “inconsistent with India’s democratic values.”

Second, the United States should broaden its engagement not only with India’s national government but with its numerous political parties and state and local officials. India has a large and diverse political landscape, spanning a wide range of political opinions. The two countries took a good first step in 2019 by announcing a parliamentary exchange, which is designed to strengthen ties between members of the U.S. House Congressional Caucus on India and Indian Americans and Indian members of Parliament. This forum should be strengthened and expanded and should include discussion about democratic values. Members of Congress, although largely supportive of a strong U.S.-Indian relationship, also share the concerns of their constituents, some of whom worry about the health of India’s democracy.

The United States should pursue a reciprocal discussion with India, underscoring the need for both to live up to their democratic values.
The Biden administration could also expand this concept of parliamentary exchange to include U.S. state and local officials and their Indian counterparts, deepening the dialogue and adding to the diversity of political perspectives from both countries. U.S. officials regularly enjoy these types of interactions with their counterparts from Australia, France, Germany, Japan, and the United Kingdom. There is no reason they shouldn’t do the same with Indian officials as well.

Third, Washington should expand its dialogues with New Delhi on cyber-issues to incorporate freedom of expression. India’s large and growing Internet user base makes it a vital market for many American companies, and the Indian government wants greater access to data generated in India. Although freedom of expression is enshrined in the Indian constitution, not all speech is protected. There are exceptions for national security and public order, and colonial-era criminal statutes on sedition are still sometimes used to target dissent. The rapid adoption of social media has turned the Internet, like print and broadcast media before it, into an arena of profound disagreement over acceptable speech and expression. U.S. platforms, including Twitter and Facebook, increasingly find themselves embroiled in questions of law and policy on freedom of expression, so Washington would do well to raise this issue with New Delhi.

Critics of the Indian government’s rights record might dismiss these suggestions as empty talk. But more bilateral talk about democracy is precisely what India and the United States need. Each country derives much of its soft power from its status as a leading democracy. An honest reciprocal discussion that puts democratic values squarely on the agenda would be to the benefit of both. U.S. and Indian officials often talk of belonging to the world’s oldest and largest democracies. With democracy under strain around the world, it is time to go beyond platitudes and inject more values into the U.S.-Indian relationship.