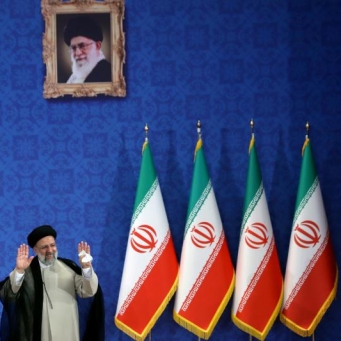 The Islamic Republic of Iran is a state divided against itself. Since its inception in 1979, it has been defined by tension between the president, who heads its elected government, and the supreme leader, who leads the parallel state institutions that embody modern Iran’s revolutionary Islamist ideals. The current supreme leader, Ali Khamenei, served as president from 1981 to 1989. During his tenure as president, he clashed over matters of policy, personnel, and ideology with the supreme leader at the time, Ruhollah Khomeini, the charismatic cleric who had spearheaded the Iranian Revolution. After Khomeini died, in 1989, Khamenei was appointed supreme leader and went on to do battle with a long line of presidents more moderate than himself.

Iran’s recent presidents have not been radicals by the standards of the country’s political establishment. But despite their differing worldviews and social bases, all of them pursued domestic and foreign policies that the parallel state labeled as secular, liberal, antirevolutionary, and subversive. In each case, Khamenei and the Islamic Revolutionary Guard Corps (IRGC), which answers directly to the supreme leader, moved aggressively and at times brutally to contain and control the elected government. The battles left the government bureaucracy depleted and paralyzed.

BORN IN STRUGGLE
The political order that Khomeini ushered into being in 1979 emerged in struggle. Removing the shah, the dictator who had ruled Iran since 1941, was a relatively peaceful affair, but the contest between Islamists and their rivals was bloody and protracted. Khomeini’s acolytes battled traditional clergy, nationalists, and Marxists for power. The 1979 takeover of the U.S. embassy by students loyal to Khomeini consolidated the Islamists’ grip on power, as did the war that Iran fought against its neighbor Iraq from 1980 to 1988, which helped expand their paramilitary force, the IRGC, as a counterweight to the U.S.-trained Iranian army.

The victorious Islamist forces established parallel institutions that collectively they call nezam, or “the system,” which is designed to neuter any threats from the secular state. Iran soon found itself riven by fault lines, however: between the supreme leader and the president, between the commanders of the IRGC and the army, and between the religious jurists of the Guardian Council (the body that holds a veto power over legislation) and members of parliament. The fissures deepened after Khomeini died, when the Islamists’ conservative wing took over and removed its leftist brethren from power. The ruling faction soon split between the parallel state and the government, headed by the new supreme leader and the president, respectively.

The supreme leader is constitutionally the ultimate decision-maker in Iran, but the president and the government bureaucracy can occasionally exploit popular sentiment to outmaneuver him. Elections have highlighted polarizing issues such as civil rights, mandatory dress codes, corruption, and relations with the United States, spurring social movements and protests that the parallel state cannot ignore. The 1997 presidential election gave birth to a formidable reform movement whose “religious democratic” aspirations altered even the supreme leader’s lexicon.

But for Iran’s recent presidents, efforts to exploit popular sentiment to push for reform usually ended in frustration and failure. As candidates, all the men who have served as Iran’s president during the past three decades—Akbar Hashemi Rafsanjani, Mohammad Khatami, Mahmoud Ahmadinejad, and Hassan Rouhani—promised to chart an independent course and open the country up to the world. Once in office, however, they inevitably fell short, constrained by the supreme leader’s active opposition. All these men also began their careers as fervent loyalists of the parallel state, and indeed they helped build the foundations of the Islamic Republic.

Rafsanjani made the first attempt to weaken the parallel state. He was himself one of the founders of the theocratic establishment, as well as an instrumental backer of Khamenei’s appointment as supreme leader. But as Iran’s president from 1989 to 1997, Rafsanjani tried to shepherd the country out of its revolutionary phase and rebuild its fractured economy by strengthening ties with the United States and Europe. Before long, he was locked in a power struggle with Khamenei, as he sought to subsume the IRGC into the army or at least reduce it to a small, elite division. His objective was to centralize decision-making within the government and prevent the parallel state’s interests from determining national security.

Khamenei foiled that plan and nixed a proposed constitutional amendment that would have allowed Rafsanjani to run for a third consecutive term. But when Rafsanjani left office in 1997, he did not exit the political scene. Instead, the competition between him and Khamenei introduced an element of volatility into Iranian electoral politics that lasted for a quarter century.

The window of opportunity for a “grand bargain” between Iran and the United States has likely closed.
After eight years with a loose cannon as president, Iranians began to support reformists who promised a return to normalcy. Rafsanjani was disqualified from running in the 2013 election by the Guardian Council, which is charged with assessing whether candidates hold loyalty to the supreme leader, and so he rallied support for his protégé, Rouhani, a former national security adviser to and nuclear negotiator for Rafsanjani and Khatami. Rouhani campaigned on an ambitious platform, pledging to defend citizens against the militarism of the IRGC and the religious extremism that restricted citizens’ daily lives, secure the release of reformist leaders from house arrest, and improve the economy by resolving the nuclear impasse. He linked economic growth to the nuclear negotiations by declaring, “It’s good to have centrifuges running, but people’s lives also have to run; our factories have to run.”

LEAKED SECRETS
The parallel state struck back hard to dampen the euphoria that greeted the 2015 nuclear deal. In doing so, it provided graphic evidence of the internal struggles within the Iranian state. In April of this year, a three-hour audio file that was part of a classified oral history commissioned by an arm of the president’s office was anonymously leaked to the media. In it, Foreign Minister Mohammad Javad Zarif can be heard bluntly stating that Iran’s foreign policy has consistently been at the service of the IRGC.

Trump’s election tipped the balance away from Iran’s elected government towards the parallel state.
The IRGC had long claimed that its advanced ballistic missiles and network of proxies across the Middle East protected Iran’s territorial integrity. In 2019, after it became clear that Iran’s policy of “strategic patience” in upholding the JCPOA was not paying off, the IRGC sprang into action to establish deterrence against further pressure from the United States. It began carrying out brazen attacks, launching a startling, precise drone strike on an oil-processing facility in Saudi Arabia and shooting down a U.S. drone over the Persian Gulf. In January 2020, the IRGC launched ballistic missiles against American forces in Iraq in response to Soleimani’s assassination. These operations also served to silence the IRGC’s opponents within the state and society.