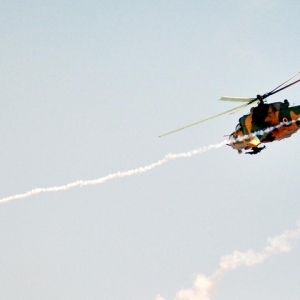 Thus far, the UN Office for the Coordination of Humanitarian Affairs has reported at least eight civilian casualties and as many as 24,000 individuals displaced as a consequence of the offensive—the most intense campaign Deraa has seen since rebel factions signed Russian-mediated “Reconciliation Agreements” with the regime in mid-2018.

The fighting continues as of this writing, further endangering the lives of civilians who have been under de facto siege by Assad and his Russian backers for months and are now being subjected to direct attacks. Local sources report that since the end of April, the number of civilian causalities has reached 250. Moscow claims it is trying to mediate a ceasefire, but this effort reportedly fell apart earlier this week, and the shelling resumed. Assad is highly unlikely to be carrying out such an intense campaign near the Israeli and Jordanian borders without Moscow’s consent.

Assad’s control of Deraa has always been tenuous, but tensions have been especially high since May, when many residents refused to participate in Assad’s fraudulent reelection and instead organized protests. With help from Iran and Russia, Damascus has attempted to reassert control there under the pretense of fighting the Islamic State, even though the jihadist group has not claimed an attack in Deraa province since May or in Deraa al-Balad district since last December.

For some time now, negotiators have been pressuring local opposition factions to relocate to Idlib, surrender their weapons, and accept a greater regime presence in the city, but their efforts failed. For instance, the Syrian Revolutionaries Front continued to fight in defense of civilians in Deraa, pushing back against army units and Iran-backed militias to such a degree that the regime resorted to sending armored divisions into the city and restricting residents’ freedom of movement. Even that show of force failed to extract any concessions from the opposition, so the regime changed tactics last week and launched a full-scale offensive.

The fighting has brought together a constellation of pro-Assad forces, including Syrian army divisions, Iran-backed militias (which control nearly twenty military posts in the province), and Russian-directed paramilitary elements. The army’s 4th and 9th Divisions have been heavily involved in the campaign, using mortars, tanks, and small arms to attack rebel-held areas. Yet while regime forces have been front and center so far, Iran-aligned forces have been quietly moving into the area for weeks. Last month, Battalion 313 (a militia affiliated with Iran’s Islamic Revolutionary Guard Corps) and the Radwan Brigades (a Hezbollah unit) were brought into the area to strengthen Assad’s failed bid to disarm the opposition. The IRGC oversees the activities of these assorted proxies.

Meanwhile, Russia’s “reconciled” 8th Brigade—largely composed of former Free Syrian Army rebels—was a prominent force in negotiating on behalf of Deraa prior to the latest blowup. Its presence highlights the complex, sometimes-competing objectives that drive Moscow to play different sides of the conflict in order to keep Damascus and Tehran in check and protect its own interests.

In broader strategic terms, Deraa has been standing in the way of regime efforts to consolidate territorial control since 2011. Many locals view Assad as a mere “warlord” and have been refusing to submit to him for a decade. Although Russia is continuing its crisis-management approach through entities such as the 8th Brigade, the transient arrangements it has brokered are not sustainable. The Kremlin’s ultimate goal is to establish de facto control over much of Syria, first through Assad’s ground forces, and later through international reconstruction funds. Hence, Russian elements will support the regime’s Deraa crackdown as long as it facilitates this goal. For his part, Assad is pursuing his usual strategy of gaining control through ethnic cleansing. And unless local demands for international protection are answered, that result seems the likeliest.

In considering what to do about the situation, Washington needs to consider several pressing factors. One is the recent shift in Russian behavior toward Israeli airstrikes in Syria, which could become even more of an issue if it extends to strategic border areas like Deraa. In July, for example, Moscow reportedly helped Assad’s forces intercept Israeli missile strikes against Iran-related targets in Aleppo and Homs provinces.

Another key factor is that Moscow is seemingly allowing Assad’s offensive to continue despite claiming to mediate the conflict. Besides raising dire prospects for the safety of local civilians, this approach may embolden the IRGC, Hezbollah, and other Iran-backed militias in the area to launch new activities that pose a threat to Israel (e.g., along the nearby Golan frontier). This could in turn threaten America’s paramount interest in regional stability.

Accordingly, as the Biden administration wraps up its ongoing Syria policy review, it should reconsider supporting rebels in the south. Deraa is the cradle of the 2011 uprising, and opposition elements there do not have the same history of jihadist extremism seen in the north. Washington should also coordinate with Jordan on appropriate responses for internally displaced persons and refugees. Perhaps most important, these developments prove what U.S. officials and their foreign partners should already realize: that any attempt to normalize relations with the Assad regime is shortsighted.