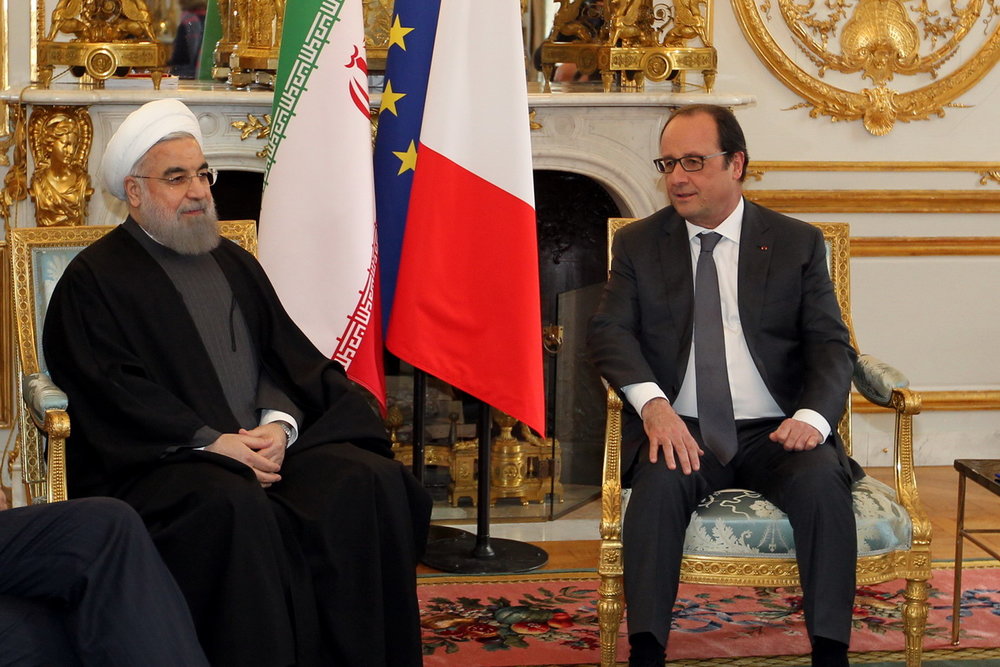 The visit of Iranian President Hassan Rohani to Europe – Italy and France has come as an inevitable and realistic result to what was agreed upon in the findings of nuclear agreement that was signed between Iran and the (5 +1), under which the economic and political sanctions on Iran were lifted , which lasted nearly two years to bring a new concept sought by the Iranian government to begin a comprehensive dialogue to resolve many of the problems with the world and represent a new phase in Iran’s relations with the EU countries and openness to find realistic solutions to resolve many of the problems that were surrounding the Iranian policy.

Iranian officials considered the nuclear deal and as stated by the President Rohani ( it is a response from God to our supplications and prayers) and eventually , everybody agreed taking into account the economic side and the preservation of their economic interests in the Middle East, where Iran has been able to restore huge amounts of money estimated by the billions of dollars that were restrained by economic sanctions, amounting to 120 billion US dollars to the treasury and to address its deteriorating economy and starting with development and internal reform policy and address the political , economic and social problems suffered by the Iranian society.
European interests were headed to flirt with the Iranians and its economic institutions and many of the European economic and governmental delegations directed to Tehran or through direct telephone and political contacts to start new pages of the European relationship with Iran and its call to the international community and to keep its regional impact in the Arabian Gulf and the Middle East area.

From here , we can read the merits ,reasons and motives of the visit by the Iranian president to France and Italy on the twenty-fifth of January 2016:
1.The visit is an important event in Iranian diplomacy where it comes in the light of rupture which was lasted for more than ten years for the last visit paid by the president of Iran, Mohammad Khatami to Italy in March 2005 and to France in October of the same year.
2. It gave an important and realistic impression for the outcome of the nuclear deal that Iran signed with countries (5 +1), and according to it , the economic and political sanctions on Tehran were lifted and starting a new page in international relations.
3. The visit is a major and important station of the Iranian policy which was started on the European arena in a clear indication that Europe was behind the driving Iran away from the international scene and the freezing of its economic and political relations with the world and to make clear that the return is done also from Europe itself and this is a positive case to them and Iranian officials consider it as one of the fruits of the nuclear deal.
4. To bring back the woof to the important economic ties which linked Iran with capitals of European countries and an example of this as it was the volume of trade exchange between France and Iran in 2004, which amounted to 4 billion euro and fell to 500 million euro in 2013 because of the economic sanctions on Iran.
5.To use moderate political speech by Iranians which was the main and prominent characteristic in the visit to demonstrate good Iranian intentions towards the world and this is clearly seen as a political tactic that it is obvious to Europeans but diplomatic imperatives make it a reality imposed in international relations.
6. The West seeks to enhance its economic potential and the expansion of financial interests in the Middle East, and Iran make up a large gate for it and the important page in strengthening its presence in the region and maintain its strategic interests in it.
7. This visit enhanced one of the important points in the nuclear deal, under which the economic and financial sanctions imposed by the EU were lifted and the openness of shareholders and European companies to work in Tehran and encourage financial investment and economic projects that contribute to improving the Iranian economy.

Results and economic fruits of the visit:
…………………………………………
1.To sign an agreement between the French Group for the manufacture of cars (PSA a) Peugeot Citroen value of (400 ) million euro over (5) years with Tehran.
2. Approval on a joint company between (Peugeot- Iranian Khodro) to manufacture French cars from Peugeot type (208,2008,301) as of the second quarter of 2017, and the rate of (200) thousand cars annually and to supervise on the current production plant (Khodro) which is located west of Tehran and under the supervision of French experts and engineers in the automotive industry).
3.To sign agreement to buy (118) transport airplanes type Airbus to improve the reality of the Iranian air fleet worth 10.5 billion euro and this was confirmed by Iranian Minister roads and construction of cities (Abbas Okhunda) , and the deal included the purchase of 45 Airbus aircraft type 320 (45) Aircraft 330 type and 16 aircraft type 350 and 12 aircraft type giant 380 and the delivery process begin in the March 2016 and continue ( 8) years.
4. Starting to sign an agreement to buy 40 aircraft from the French group (A.ta.or) and to br done in the Iranian capital Tehran in the presence of representatives of the French company which promotes the Iranian aircraft fleet of transport.
5.To sign trade and economic agreements between Iran and Italy worth 17 billion euro, and the announcement came in the Iranian- Italian Economic Forum in the capital (Rome) with the presence of a large number of Italian investors and businessmen and the Iranian president spoke in it , saying: (Iran is the most secure and stable country in the Middle East now).
6. At the Forum (Franco – Iran ), which was held at the headquarters of the Federation (Medef) in the French capital , President Rowhani , with the presence of Prime Minister of France said (Manuel Valls) that the Iranians ( we are ready to open a new page in relations between the two countries and today we came to welcome investors and the men of the French business and invite them to work in Iran). In a reply word by the Prime Minister of France said: (We seek partnership for long-term).
7. To bring back the investment in gas and oil fields and prospecting them and starting to extract them and take advantage of its export and use of oil products that accompany the process of investment in the energy field in which the French companies will have a prominent place in these processes .
This visit and the political discourse which came with it and the Economic agreements signed with a huge money and call to invest in Iran , all factors in which Iran is trying to use in it a moderate political speech , as a matter of fact ,it is a false moderation and configurable and contradictory with Iranian policy on the ground in Iraq, Syria, Bahrain, Yemen, Lebanon and the West knows that but it seeks to promote its economic interests and maintain its position in the Middle East and the Gulf region.