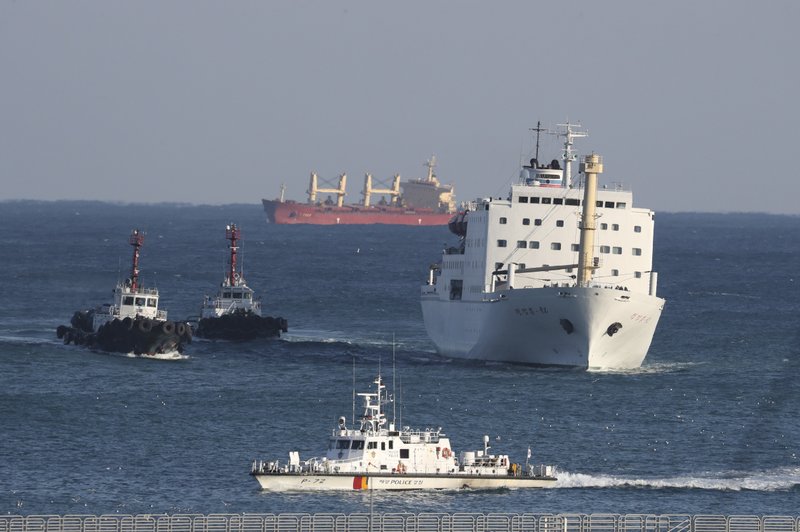 SEOUL, South Korea (AP) — From smartphones to ship fuel, South Korea is wrestling how to balance international sanctions on North Korea with its desire to show the Olympic spirit as it welcomes hundreds of North Koreans for the Winter Games.

Spearheaded by the U.S., the international community has been imposing tougher sanctions designed to punish North Korea’s economy in an effort to rein in its nuclear program. But South Korea has been flexible with these rules as it accommodates the North Koreans to the Pyeongchang Games.

South Korea sent a chartered plane to bring North Korean skiers. It allowed North Korea to use a 9,700-ton ferry to transport more than 100 artists to perform at the Olympics and says it’s considering whether to accept the North’s request to supply fuel for the ship.

South Korea says the decisions were inevitable for the success of the games, which it sees as an opportunity to revive meaningful communication with the North after an extended period of animosity and diplomatic stalemate. But critics say South Korea is playing into the hands of North Korea as it tries to use the Olympics to poke holes in sanctions.

A look at some of the concessions South Korea has made as it greets the North for the Olympics:

The Koreas agreed to open their conciliatory gestures over the Pyeongchang Games with joint practices and friendly competitions between their skiers at North Korea’s Masik winter resort.

But the Jan. 31 trip wasn’t official until less than two hours before the chartered Asiana Airlines flight carrying the South Korean skiers took off for the North’s Kalma Airport.

Seoul needed until the last minute to persuade Washington to consider the flight an exception to sanctions announced by President Donald Trump’s administration in September that include banning vessels and aircraft that have visited North Korea from traveling to the United States within 180 days.

The South Koreans were accompanied by a 32-member North Korean delegation, including 10 athletes invited to participate for the Olympics, on their return flight the next day.

It was the first direct South Korean flight to North Korea since 2015, when South Korean labor unionists flew to Pyongyang for a goodwill soccer match.

South Korea accepting North Korea’s offer to send its artists to the games by sea has triggered debate in the South, where conservatives saw the move as a sure-fire sign that the North is trying to use the Olympics to ease pressure against the country. The Mangyongbong-92 arrived at an eastern South Korean port Tuesday afternoon with 114 members of an art troupe that will perform in Gangneung on Thursday and Seoul on Feb. 11.

To allow the ship to travel to the South, Seoul treated it as an exception to sanctions. Critics say Seoul is sending the wrong message to North Korea and also the international community.

South Korea’s Unification Ministry said Wednesday that the government is reviewing whether to meet North Korea’s request to provide fuel to the ferry.

The Pyeongchang Organizing Committee is refraining for now from giving out a premium smartphone to athletes from North Korea and Iran, not to step over the global sanctions designed to pressure their governments from developing nuclear weapons.

Olympic sponsor Samsung Electronics donated 4,000 Galaxy Note 8 to all athletes and International Olympic Committee officials. The limited edition is not for sale but the Galaxy Note 8 phones are among the most expensive mobile devices in the market. Its price starts at about $1,000.

But North Korean athletes won’t have the fun of taking selfies and filming their time in the South with the Samsung phone. The United Nations bans sending luxury items to North Korea or to North Korean nationals.

The IOC advised the Organizing Committee that North Koreans can use the Samsung phone during the games that start Friday and return them before their departure. But the organizer decided not to give out the devices, rather than risking violating sanctions.

North Korea informed the South on Wednesday that leader Kim Jong Un’s sister, an increasingly prominent figure in the country’s leadership, will be part of a high-level government delegation traveling for the Olympics. Kim Yo Jong, believed to be around 30, will be the first member of North Korea’s ruling family to visit South Korea since the end of the 1950-53 Korean War.

South Korean media had speculated North Korea would create another sanctions-related headache by insisting on sending its senior officials via the U.S.-boycotted Air Koryo. However, North Korea informed the South on Thursday that the delegation including Kim Yo Jong will arrive on a private jet on Friday hours ahead of the Olympics’ opening ceremony.

Neither Kim Yo Jong nor Kim Yong Nam are among the North Korean officials blacklisted under U.N. sanctions. However, the U.S. Treasury Department last year included Kim Yo Jong on its list of blacklisted officials over her position as vice director of the ruling Workers’ Party’s Propaganda and Agitation Department.

The U.N. committee monitoring sanctions against North Korea has proposed granting an exemption for Choe, who has been on the U.N. sanctions blacklist since June last year.