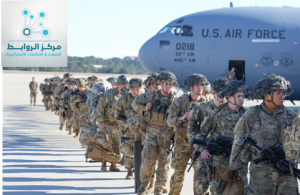 The issue of the American presence in Iraq did not turn into a core issue in the political debate only after the America killed the leader of the Quds Force in the Iranian Revolutionary Guard, Qassem Soleimani, accompanied by the deputy head of the Popular Mobilization Authority, Abu Mahdi Al-Muhandis, near Baghdad airport on January 2, 2020. This prompted the House of Representatives on January 5, 2020 to take a decision that “binds” the Iraqi government to “cancel the request for assistance submitted by it to the international coalition to fight ISIS,” requesting “it” to work to end the presence of “any foreign forces on Iraqi soil, and to prevent it” from the use of Iraqi land, water, and air for any reason. ”

Regardless of the legality of the “decision” to remove US forces from Iraq, it is also, like all important decisions in the Iraqi parliament, that do not enjoy unanimity and there are different positions in it . The American-Iranian confrontation on the land of Iraq revealed the nature of the apparent disparity in the position of the sub-identities on this issue .The Kurdish and Sunni blocs rejected this decision ( they did not attend the meeting at all ), in exchange for a semi consensus of the Shiite blocs on it It was noticeable that the Speaker of the (Sunni) House of Representatives, who always repeated the phrase “transgressing sectarianism”, did not preside over this session, in order for this decision not to be counted on him by the USA , but rather to leave it to his deputy. He spoke frankly that this decision is a “Shiite” decision; it is not a decision of the Council as a whole .

In the light of this decision, the statements of Negavan Barzani seemed sharp about it, through his assertion that «the decision taken by the Iraqi parliament was not a good decision, and that the Kurds and Sunnis did not participate in it. Moreover, it sets a bad precedent, as the decision was taken by the Shiite bloc, without consulting any of the main components of this country: the Kurds and the Arab Sunnis,”indicating that it was“ a very critical step that was taken without seeking consensus, and thus violating the spirit the Iraqi Constitution.

Barzani pointed out that «the question that must be addressed first is: Why are American forces here? They are here at the invitation of the Iraqi government in 2014, and in consultation with the United Nations Security Council, when (ISIS) was on the outskirts of Baghdad. ”He added:“ The second question is: Does the current situation in Iraq justify the withdrawal of US and coalition forces, given its mission, which is to help defeat ISIS? We, the Kurdistan Regional Government, are concerned that the answer is clearly no, as all intelligence data indicates that ISIS has regrouped, and that they carry out attacks against Iraqi targets on a daily basis. Hence, the interest of Kurdistan concerns the American forces as much as it is in the interest of all of Iraq.

“The Kurdish parliamentarians have acted with great courage to move away from the parliamentary vote,” said Bilal Wahhab, a fellow at the Washington Institute for Near East Policy. He noted that Kurdish lawmakers had received threatening messages from Shiite militias, including the Hezbollah Brigades, whose founder, Abu Mahdi al-Muhandis, was killed alongside Soleimani in the US raid. The question that arises in this context is why the Iraqi Kurds rejected the decision of the Iraqi parliament? Perhaps there are two dimensions that contributed to building this rejection:
First – The American military presence in Iraq represents a political support for the Kurds. On the one hand, their presence guarantees that the Shiite political class will not seize control of Iraq alone. Their presence also represents an opportunity to reinforce their desired dream of establishing their independent state, whether in the near future or medium term.

Second – The American military presence in Iraq represents a military and security support for the Kurdistan region of Iraq in the face of the dangers of the terrorist organization ISIS , and the Kurds, and sensing from them the danger of the terrorist ISIS over the lines of the presence of Peshmerga , settled their position by rejecting that decision, including not participating in the parliament session that voted to remove the American forces from Iraq.

From a security standpoint, the Kurdish vision in the Kurdistan Region of Iraq is based on the need for the American forces in Iraq to maintain a United States military presence, however modest, to ensure the ultimate defeat of the terrorist organization ISIS. On the other hand, if the killing of Soleimani leads to the withdrawal of the American forces involved in the local operations against the organization, this would constitute a major blow to the war on terror. Even after the organization has lost its last strongholds of its Caliphate in March 2019, it was still able to carry out 867 terrorist operations inside Iraq alone during the rest of the year. There is no doubt that the number and intensity of these attacks will increase in the absence of the military pressure exerted by the American and allied forces.

It is worth to be noted that the ongoing operations against the strongholds where the organization is just as active in Syria will also be mortally undermined indicating that there are potential dangers to the growing pockets of ISIS in many liberated areas, and the possibility of their strong return after the departure of coalition forces , which provide air, intelligence, and technological services .

The United Nations estimates that the terrorist organization ISIS still has a reserve of $ 300 million to support its terrorist campaign, while Kurdish officials note that today, the organization has secretly redeployed its ranks in Iraq equipped with “better techniques and better methods.”

The “early” exit of these forces could bring back the 2014 scenario, i.e. the return of ISIS, thus posing a real threat. Also, any decisive political decision regarding the exit of American forces may open the way for a Kurdish rejection of a decision in this way. Therefore, the survival of the American forces in the Kurdistan region, especially if the United States decides to reconsider its decision regarding the “independence” of this region or if it supports directly, Sunni forces to announce their commitment to the survival of the American forces in Iraq in their areas, which seriously threatens the country’s unity.

The Kurds believe that Iraq so far is unstable in terms of security, political, and even economic aspect , in order to work to remove US forces from it. This American presence contributes strongly to the elimination of ISIS, especially through air strikes that have had a great impact in ending its presence in Iraq. And they consider that ending the American presence in Iraq will make it to lose the compass of balance. There are armed factions that openly talk that they are with Iran, even if the war is with Iraq. The American presence is holding back and reducing Tehran’s influence within the Iraqi arena. And that “the Kurdish political forces fear the end of the American presence for fear of the domination of these armed factions on the Iraqi scene, politically, militarily and economically.” And talk about ending the American presence must be preceded by the condition that Iraq is the master of itself and its official security forces are in control of the security situation, and this needs time and not now.

Accordingly, the Kurdish vision is based on the fact that the positions and calls for the hasty exit of American forces from Iraq appear to be ill-considered moves, and they involve the dimensions of some of the interests and opportunists, while others carry sympathy with the neighboring countries, and this is not commensurate with the nature of international relations and obligations that are required by constants that must be observed in the end.