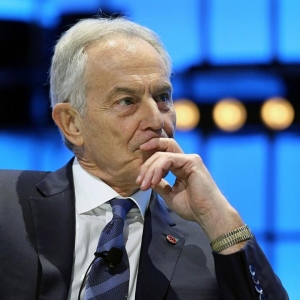 On January 11, The Washington Institute held a virtual Policy Forum with Tony Blair. The former Prime Minister of Great Britain and Northern Ireland, he currently serves as Executive Chairman of the Tony Blair Institute for Global Change, an organization committed to reinvigorating the center ground in politics, supporting leaders around the globe in their fight against COVID-19, and providing solutions on issues ranging from extremism to the technological revolution. The following is a transcript of his conversation, lightly edited for grammar and syntax.

Robert Satloff: Hello and welcome to The Washington Institute. I am Rob Satloff, Executive Director of the Institute, and I am delighted to welcome you to a very special event.

It is therefore a great privilege to host this event with our special guest, former Prime Minister Tony Blair. Mr. Blair is the Executive Chairman of the London-based Tony Blair Institute for Global Change. He is the winner of three consecutive elections to serve as British Prime Minister, the only Labour leader to ever do so. He is one of the few true statesmen of our era. In fact, we confirmed that at The Washington Institute by awarding him our Scholar Statesmen medal, our highest honor, in 2010. It is now ten years later, and we are delighted to host this event with Mr. Blair in this consequential hour in the history of our nation and for our world. Welcome, thank you very much for joining us today!

Satloff: I think it makes sense to begin with the events of last week. I will not ask you to comment on our domestic politics but rather on the impact of the recent events on America’s global standing and the leadership that people around the world hope to see from Washington and from President Biden to address all the collective issues that we have to face.

Secondly, Joe Biden as president-elect is pretty much the right man in the right place and at the right time because he is deeply experienced, and he is by instinct someone who tries to reach out to those who disagree as well as those who agree. Your politics has exploded on to the world stage by what happened last week. But many of the fissures in American politics and society are also occurring around the Western world right now. They have not taken as ugly and extraordinary a form as they did in Washington last week. But it is going to be important for American politics to heal itself because that will also give some solace to other countries with deeply divided politics.

Satloff: Mr. Blair, let’s ask about the strategic implications of the pandemic. Beyond addressing the public health priorities of each of our countries, in what way do you think the pandemic has changed international politics and affected the national security agenda of the new administration?

Blair: One of the things my Institute has done in the past year is virtually repurpose itself to studying COVID-19, the right responses, the right policies in terms of things like testing and vaccination and so on. The bad and challenging news is that this virus is mutating. I think you have to look at this as a struggle of several years as we are going to be trying to chase the virus out at the same time as the virus is mutating and changing. We may well get to a point where we will have to adapt or change the vaccines that we are using.

So here are the things I think are very clear. Number one, what the pandemic has exposed are profound flaws in the global health architecture. Surveillance—we did not spot this soon enough and get the right data objectively so that we could see what was happening. Vaccine development—we should be making preparations now for a whole series of families of potential pathogens that could result in a pandemic for the future, we don’t have that research capability in place at the moment. Vaccine production and development is sensitive in many parts of the world, but we do not have a coherent and developed global policy to make sure we have optimal vaccine production. We have about 200 vaccine attempts going around the world when the most we are ever going to need is probably under ten vaccines. And then we have real anxieties on the part of governments as to what right advice to follow. One of the debates we have been having in the UK, in which I have been prominent, and which originally came from my suggestion, was that for the two doses of vaccine—provided that the first gives you an immunity of over 70 percent—it is sensible to not hold back the vaccine but to get it rolled out as swiftly as possible.

But you need expert guidance on a lot of these matters. Some of the approvals for vaccines and therapeutic drugs have taken a long time. The AstraZeneca vaccine, with which I have been most involved, has been there since March. But we need to find how to accelerate the trial and testing procedures before passing these vaccines because in the future we have to shorten the period between a pandemic beginning and getting on top of it with good vaccines.

Secondly, I think the American-European relationship is of vital importance not just because of the pandemic, but because of issues like climate and what we do about China policy. And thirdly, the single biggest thing people are looking for from the incoming administration is strategic predictability. In other words, when there is a problem, there is a strategy in place—and not a series of ad hoc reactions—that your allies can get behind.

Satloff: First of all, your observation that this is going to be a years-long, not months-long, challenge is very sobering. Secondly, even without the pandemic there would be a very long list of items in the new administration’s national security and foreign policy agenda. What advice would you give on separating the urgent from the important in terms of what the president himself focuses on early on?

Blair: It is always difficult. The problem in politics is that you get your freedom to decide what the response is to a situation, but you do not get to decide what the situation is. I would have thought that the president would focus first of all on the pandemic itself. But what I am really saying is that part of that focus is getting global cooperation going.

Secondly, of course, I believe the issues around China will be immensely important. Issues around the Middle East, Iran, but also reestablishing a really strong link with the other side of the Atlantic because all of these problems will be easier to deal with if we deal with them together.

We published a very good essay today which tried to frame the question in the current Middle East. In my view, there are some signs for optimism if we correctly analyze what is going on. You should look at the region as one big struggle, which is the desire of the younger generation to get to rule-based economies and religiously tolerant societies. That is a growing group of people. They want to know that if they work hard and play by the rules, they can grow businesses and they can raise their families in stability. They understand why the rapprochement between the Arab states and Israel is so important. They understand that, in the end, the only future for the Middle East is to get connected to the world, and part of that connectivity is to be religiously tolerant and open-minded toward those of different faiths and cultures.

Blair: First of all, the rapprochement between the Arab states and Israel is a great cause for hope. My Institute and I were very involved in the Israeli-UAE rapprochement. But what would have been the odds of that sometime before? And it still has a long way to go and it can go a lot further. I have no doubt at all that in the end this will become a significant part of the new architecture in the Middle East. It will be a warm peace, not a cold peace.

Blair: It is important to assert your actual assessment of a situation. My assessment with respect to Saudi Arabia is that people rightly and strongly criticize it. However, there is no doubt there are important modernizing elements and developments of social and religious change. For example, take the relationship Saudi Arabia has had to the peace process with the Palestinians, the Arab Peace Initiative in the earlier part of the century, now its support for the rapprochement with Israel—even though Saudi Arabia is not itself part of that, it has yet given a fair wind to the UAE’s rapprochement with Israel—and contrast that with the Islamic Republic of Iran, which is supporting those elements that want to destroy any hope and peace as well as Israel itself.

So, you need to be judicious. That does not imply you should turn a blind eye to human rights abuses—you should raise concerns. But you should also praise when such praise is due for the genuine modernizing measures that are being taken. Otherwise, you can end up with the erratic equivalence between the position of the Iranian regime on one side and what is happening in Saudi Arabia today.

Satloff: There is a big debate on how to approach Iran, either through the nuclear lens or its broader regional behavior, as well as how to address these issues, be it through pressure or inducement. What is your advice to the new administration?

Blair: Iran is a negative, destabilizing force in the Middle East. If there was a reasonable regime in Iran, I would double my optimism overnight. The truth is that in virtually all areas in the Middle East, they play a role that is harmful, supports the most extreme elements, and prevents countries from making progress toward rule-based economies and religiously tolerant societies..

Blair: Joe Biden does not need any advice from me. I have known him for a long period of time. You have one of the most experienced teams working for the new administration. I am quite hopeful because the team members are close to him and to one another, so they might produce a coherent policy response. I would not give him any advice, but I would tell him that from the outside there is an immense yearning from America’s allies for the U.S. to provide strategic leadership on the global stage. The Europeans and the UK will want to work with the U.S. despite potential points of friction. Therefore, one should not underestimate the intense desire to see America recognize that strong alliances serve its own self-interest.

I also want to urge everyone to go to the website of The Washington Institute, where we are beginning to publish a series of transition papers for the new administration. The first, Dennis Ross’ advice on Iran nuclear diplomacy, went up a few days ago, and there will be more launched over the course of the next few weeks.