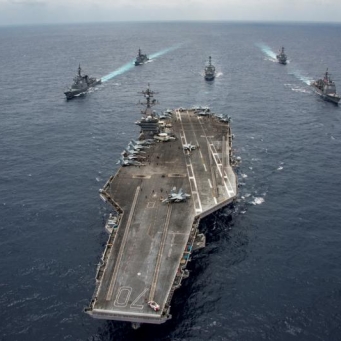 Over the last decade, and especially over the last four years, Japan has emerged as a quiet leader in the Indo-Pacific. While the United States abandoned its allies and succumbed to illiberal populism under President Donald Trump, Japan remained a stalwart of the liberal, rules-based international order. It deepened ties with its neighbors, expanded multilateral initiatives, and set the regional agenda on trade and digital governance, among other issues. Through a combination of good timing, clear-eyed leadership, and innovative domestic reform, the island nation has proved not only a reliable partner to the United States and its allies in the Indo-Pacific but an architect of the region’s emerging liberal order.

In an era of Chinese bellicosity, North Korean provocations, and a raging pandemic, Japan’s inconspicuous ascent to regional leadership has gone mostly unnoticed. But as the administration of President Joe Biden seeks to repair frayed alliances, Japan has become the key to restoring American credibility in Asia. Only by solidifying relations with its longtime Asian ally and collaborating on multilateral efforts can the United States repair its damaged reputation in the Indo-Pacific and regain a foothold in the region’s future.

DOING MORE
For much of the second half of the twentieth century, Japan’s role in international affairs was constrained by its postwar treaty obligations. In 1951, Japan and the United States signed a security agreement that codified the former as a pacifist nation tethered to the latter for military support. As a result, Tokyo pursued a largely reactive foreign policy that Japanese diplomats described, on various occasions, as “sterile,” “naive,” and plagued by “a conspicuous absence of strategic thinking.” Some Japanese scholars wryly dubbed Japan’s postwar strategy “karaoke diplomacy”—Tokyo merely singing the tune set by Washington.

Stay informed.
In-depth analysis delivered weekly.
In the 1960s and 1970s, Japan began a miraculous climb to become the second-largest economy in the world. Partly as a result, the United States and other Western powers began to push Japan to play a larger role in regional security. The collapse of the Soviet Union and the United States’ expanded role in the Middle East during and after the first Gulf War made Washington ever more insistent that Japan shoulder more of the security burden in Asia. “For decades, Washington’s message to Tokyo on defense had been simple,” the journalist Richard McGregor writes in Asia’s Reckoning. “‘Do more.’”

In the first decade of the new millennium, an up-and-coming group of nationalist politicians led by Prime Minister Junichiro Koizumi and later by Prime Minister Shinzo Abe answered the call. In what the political scientist Richard Samuels has called “the most consequential political change in Japan since 1945,” the nationalists consolidated power, bolstered Japan’s self-defense capabilities, and strengthened the executive branch of government at the expense of the country’s once powerful bureaucracies.

Gradually, under the leadership of the nationalists, Japan began to play a more proactive role on the international stage. The country’s Self-Defense Forces took part in major disaster relief operations, including those organized after Hurricane Katrina in 2005 and the tsunami in Southeast Asia that same year, and in UN peacekeeping operations in Cambodia, Mozambique, and the Golan Heights. In 2015, Japan’s parliament passed legislation reinterpreting the constitution to allow the country’s military to engage in collective self-defense under the United Nations Charter. The reform, Abe remarked, made U.S.-Japanese relations “much stronger,” adding that “we can defend each other from now on.”

A NEW LIBERAL LEADER
The domestic reforms of the first decades of the twenty-first century made Japanese leadership in Asia possible, but Trump’s election made it necessary. Shortly after taking office, Trump withdrew from the Trans-Pacific Partnership, a twelve-nation trade agreement championed by President Barack Obama. But Japan salvaged the deal, convincing the remaining countries to go ahead with a version of the pact, rechristened the Comprehensive and Progressive Agreement for Trans-Pacific Partnership. The CPTPP established new rules on trade, intellectual property, and data governance that stand in stark contrast to China’s illiberal vision for the region—and that are expected to generate an additional $147 billion in annual income for member states. Biden has indicated that his administration is interested in joining the CPTPP. If he does, he will be recommitting the United States to a liberal international trading system of which Japan has become the anchor.

Japan has further raised its profile by lavishing countries in the region with economic assistance at levels competitive with China. Between 2001 and 2011, Japanese development agencies funneled a total of $12.7 billion in aid to countries in Southeast Asia and the South Pacific—more than double the $5.9 billion China spent on aid in those years. And while Chinese aid and investments have ramped up since then, Japan has kept pace: in 2015, Tokyo established the $110 billion Partnership for Quality Infrastructure, whose recipients include the Philippines ($8.8 billion), India ($15 billion), and Indonesia ($1.2 billion), all of which have territorial and maritime disputes with China and are concerned about Chinese expansionism. Prioritizing transparency, environmental sustainability, and accountability, Japan’s infrastructure program stands in stark contrast to China’s notoriously opaque Belt and Road Initiative. And whereas China’s megafinancing efforts have occasionally generated ill will, Japan’s seem to be translating into genuine trust: in a 2019 poll commissioned by the Ministry of Foreign Affairs of Japan, more than 90 percent of respondents in the ten countries that make up the Association of Southeast Asian Nations described Japan as “friendly” and “reliable.”

For the past four years, Japan has steered the ship of liberal internationalism with skill.
In addition to economic leadership, Japan has assumed a role that was once the pride and prerogative of the United States: shaping international norms in opposition to those of an illiberal competitor. Abe has been an active promoter of liberal values, not just on trade but on law and security. His administration helped develop the concept of a “Free and Open Indo-Pacific” governed by the rule of law, freedom of navigation, and free enterprise. After Japan and the United States both formally adopted the concept as a strategy in 2017, a Japanese official wrote anonymously in The American Interest that “the Japanese side contribut[ed] equally—if not more—to its content. . . . For some Americans, it may be easy to overlook the significance of this transition.” But for Japan, the official wrote, “this was a critical breakthrough.”

In 2019, at the G-20 summit in Osaka, Abe made another significant contribution to emerging international norms—this time in the arena of digital governance. In contrast to China’s vision of “cyber-sovereignty,” an Internet splintered along national boundaries, he laid out a vision for a future where data flow freely and securely across borders. With his concept of “Data Free Flow with Trust,” Abe accomplished something the Trump administration never bothered to attempt: the application of liberal values to new frontiers. By the end of Trump’s presidency, the flag bearer of liberalism in Asia was not the United States but Japan.

FOLLOW THE LEADER
Biden has promised to rejoin international bodies and agreements, recommit to allies and multilateralism, and renew American leadership, including in Asia. But after four years of Trump and a disastrous response to the coronavirus pandemic, many in Asia no longer view the United States as a defender of the liberal order or even a trustworthy partner. Any attempt to reassert American primacy overnight will further alienate countries in the region. The Biden administration must pursue a more tactful approach to restoring U.S. credibility and leadership—bolstering relations with Japan and coordinating closely with it on regional multilateral initiatives. Over the last four years, Japan has built up a reservoir of trust and goodwill with Asian countries. The United States can access that goodwill, but only if it learns to listen and follow the lead of its longtime ally, instead of attempting to reinvent the wheel.

Washington must first work to reduce areas of friction with Tokyo. Swiftly and amicably renewing the agreement under which Japan hosts U.S. troops would send a strong signal to other Asian countries, and to Beijing, that there is little daylight between Washington and Tokyo. Biden should also seek to join the CPTPP, enhancing the ability of Japan, and of the United States by extension, to shape Asia’s economic norms and standards. Finally, Japan’s Partnership for Quality Infrastructure program is already a competitive alternative to China’s Belt and Road Initiative, both economically and ideologically. Washington should supercharge it, aligning the work of its new development institution—the U.S. International Development Finance Corporation—with Tokyo’s. Reinforcing Japan’s value diplomacy and its network of partners will enable the United States to repair its credibility and win back trust in the region.

For the past four years, Japan has steered the ship of liberal internationalism with skill. Prime Minister Yoshihide Suga, an Abe protégé who took office in September, has already made clear that he intends to continue leading in the tradition of his predecessor. He has sustained Abe’s active diplomacy, reaffirmed Japan’s commitment to the multilateral trading system, and continued to advance international norms on digital governance. The United States is not used to taking cues from another nation, but four years of unsteady U.S. leadership in Asia should be a lesson in humility for Washington. The Indo-Pacific karaoke parlor is still open to Americans, but it is time to let Japan choose the song.