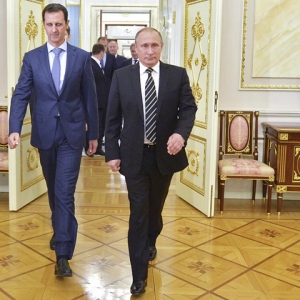 Neither massive domestic protests and economic woes, nor the pandemic and growing upheavals on Russia’s borders have stopped Russian president Vladimir Putin from increasing Russia’s presence in Syria on military and diplomatic fronts. Over the years, Russian officials made no secret of their preference for American forces to leave the country. Moscow is in Syria for the long haul and continues to indirectly undermine US efforts there.

Growing Presence in Northeastern Syria
Starting in late December 2020, amid a backdrop of a presidential transition in the United States—a time the Kremlin will always use to test Washington—Vladimir Putin began increasing the Russian presence in northeastern Syria, a mixed Kurdish-Arab zone that borders Turkey and Iraq. Approximately three hundred Russian military police arrived at Hassakeh, a Kurdish-led province in the northeast. Moscow reportedly deployed additional units to Qamishili and the town of Ain Issa in Raqqa, amidst growing fighting in that area. More broadly, these deployments come against a backdrop of friction over the summer between Russian and American troops in eastern Syria.

The latest stationing of military police was a message to the United States but also to Turkey that Moscow does not want to concede this space. Northeastern Syria has been one of the critical focal points of conflict since the rise of ISIS. The semi-autonomous region’s current chief local authorities—the Kurdish-led Syrian Democratic Forces (SDF)—are backed by the US, but the region is a complicated mosaic that straddles Syrian, American, Turkish, Iraqi Kurdish, and Russian interests. The Russia-Turkey relationship overall, and in Syria especially, is unequal—Russia holds more cards, and Turkish president Erdogan has come to accept cooperation with Moscow in the region. Still, Russia and Turkey came close to direct military confrontations in Idlib, where Turkey-backed anti-Assad rebels operate; Turkey also launched deadly offensives into northeast Syria against Syrian Kurds, and currently, the country retains control of some parts of the region. Moscow would like to limit Turkey’s military influence that might step on Moscow’s and al-Assad’s interests in the region.

Putin has had his eyes set on augmenting the Russian presence in northeastern Syria for a long time, at least since the announced partial US withdrawal in the fall of 2020. A reduced American presence, it seemed, would give the Syrian Kurds no choice but to make a deal that would allow Damascus to regain control of this region and thereby bring Bashar al-Assad closer to victory. Putin’s hope has proven premature to date, but the region is fragile, and he has not given up, as the additional deployments show.

Alexander Nevsky and Khmeimim
Russian advances have not been limited to the northeast: further south, on Syria’s Eastern Mediterranean border in Latakia where the Russian Khmeimim air base is located, Russian servicemen unveiled a monument to the patron saint of the Russian army, Prince Alexander Nevsky. Khmeimim has been one of the key focal points of the Russian intervention in Syria and is a key strategic stronghold, along with the Russian naval facility in Tartus.

Symbolism resonates both in the Middle East and in Russia. The order of Alexander Nevsky, one of the highest awards in Czarist Russia, usually given for military or political service, had been revived by Soviet and Putin’s Russia, and represents defense of the Fatherland. Moreover, the monument’s unveiling at Khmeimim took place on January 27—the day that Russia commemorates the end of the Nazi blockade of Leningrad—a reminder of ultimate victory. Alexander Nevsky stands as a statement of Russia’s interests and intentions in Syria.

Symbolism goes hand in hand with action on the ground, and the latest reports note that Moscow is also extending a runway in Khmeimim that could reportedly “help accommodate heavy airlifters carrying more cargo or other large aircraft.” Moreover, Russian state-owned TV Channel One aired an exclusive led by Dmitry Kiselyov, one of Kremlin’s chief propagandists, about Russia’s rapid development of UAV (Unmanned Aerial Vehicle) technologies, which, the report notes, is a key priority for the Russian military. The report revealed what it described as heretofore classified footage of Orion, Russia’s UAV, during field trials and use in military operations in Syria. These activities point to an expanding Russian military presence in Syria and the Eastern Mediterranean in particular, which is likely to further complicate NATO operations

Diplomacy
Moscow has not ignored the diplomatic front either; days after President Biden took office, Moscow, Tehran, and Ankara released a joint statement after the fifth round of Geneva-based peace talks on Syria stressing their “strong commitment to the sovereignty, independence, unity, and territorial integrity of the Syrian Arab Republic.” This statement came when the fifth round of the Syrian Constitutional Committee meeting on January 29, 2021 failed to produce tangible results. “[W]e can’t continue like this…the week has been a disappointment. I set out a few things I thought we should be able to achieve before we started this meeting, and I am afraid we did not manage to achieve these things,” UN special envoy for Syria Geir O. Pedersen said after the meeting.

More recently, on February 16 and 17, 2021, Moscow hosted the fifteenth round of separate peace talks to discuss Syria’s constitutional process in Sochi under the rubric of the Astana talks—a trilateral forum comprised of Russia, Iran, and Turkey that Moscow established four years ago ostensibly to negotiate an end to the Syrian conflict. In reality, the Astana peace talks created an alternative track sidelining the United States and promoted Russia as a peacemaker that favored al-Assad and silenced genuine opposition. With emphasis on Moscow’s hard power in Syria, it is easy to miss the more nuanced soft power efforts. Against this backdrop, it should hardly surprise that Syria is the latest country to approve the use of Russia’s COVID-19 vaccine Sputnik V, and that Moscow is working on its direct deliveries to Damascus.

Conclusion
As March marks the tenth anniversary that propelled the Syrian uprisings to the forefront of the Arab Spring after al-Assad’s security services brutally tortured boys as young as ten years old for simply spray-painting anti-regime graffiti, it is worth remembering how far these events reverberated. Russia for its part has been using Syria since September 2015 not only to expand its influence in the country and prop up al-Assad, but also as a springboard for operations and power projection throughout the entire Middle East. Syria may not be a priority for the Biden administration, but it is a priority for Putin. A growing Russian presence in the country will only further hurt American, and more broadly Western, interests.