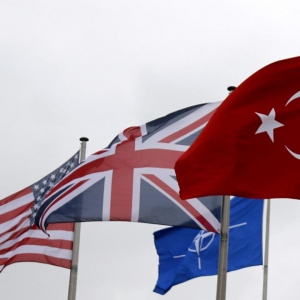 Almost two decades after the 9/11 attacks, and just weeks after domestic violent extremists stormed the U.S. Capitol, the Biden administration recommitted itself to reinvigorating alliances to address U.S. national security challenges. As the administration’s newly released Interim National Security Strategic Guidance states, “Recent events show all too clearly that many of the biggest threats we face respect no borders or walls, and must be met with collective action,” including violent extremism and terrorism. While critical, this will be no easy lift.

Under President Donald Trump, the United States withdrew from a laundry list of international treaties and institutions, took a dismissive attitude toward America’s traditional European allies, belittled the NATO alliance, and dispensed with alliance building in favor of highly transactional and, typically, bilateral international engagement. Trump’s policies led one European counterterrorism official to comment, “Does the Trump administration not understand that its actions in Syria are undermining our national security? We are not an ocean away from Syria; the problem is at our back door.”

The Biden administration’s need to restore U.S. credibility as a partner is all the more urgent following the Trump administration’s multiple knee-jerk announcements on military withdrawals from Syria. Defending his October 2019 decision to withdraw troops, Trump tweeted that the United States “can always go back & BLAST!” should the Islamic State make a comeback. To which Brett McGurk—who had served as the president’s envoy to the Counter-Islamic State coalition under Trump and President Barack Obama —responded, “Actually, you can’t. Who is going to sign up with us? Who is going to fight with us?”

“Diplomacy requires credibility,” then-candidate Joe Biden noted, adding that “in the conduct of foreign policy, and especially in times of crisis, a nation’s word is its most valuable asset.” The first step in that direction is holding close consultations with partners and allies to determine how they prioritize the national security threats facing their countries and finding areas of common cause. Such meetings also present opportunities to help shape partners’ and allies’ threat perceptions, and build consistency between U.S. and partners’ and allies’ threat perceptions. There is broad consensus on the threats posed by the Islamic State and al-Qaeda, for example, although sharp divisions—over matters like the Turkish incursion into northern Syria and whether to repatriate foreign fighters—have defined how key countries address these threats. Similarly, disagreements persist over the threat level and the appropriate response to Lebanese Hezbollah, Iraqi and other Shia militias, and Iranian operations such as assassination and bombing plots in Europe in recent years.

Rebuilding U.S. credibility as a counterterrorism partner, however, starts at home. In the eyes of many allies, the United States now functions as a de facto safe haven for transnational white supremacist and far-right violent extremists. The Jan. 6 insurrection threatened not only U.S. domestic institutions but also national security interests and foreign policy priorities. As an exporter of right-wing extremism, the United States has seen its image tarnished, undermining one of its best tools to draw partners to join counterterrorism efforts around the world. As Russell Travers, the former acting director of the National Counterterrorism Center and current deputy homeland security adviser on the Biden National Security Council, has noted: “For almost two decades, the United States has pointed abroad at countries who are exporters of extreme Islamist ideology. We are now being seen as the exporter of white supremacist ideology.”

In a new study outlining what a rationalized and sustainable counterterrorism posture should look like 20 years after 9/11, I argue that convincing partner nations to form burden-sharing alliances with the United States will only be possible once the United States has taken tangible action to restore its credibility as a reliable long-term partner, both at home and abroad.

The United States needs to “do stuff,” as the truism goes, to get allies to participate in and contribute toward alliances. This means leading on some counterterrorism lines of effort and supporting on others. As Secretary of State Antony Blinken acknowledged, U.S. allies “raise the questions of the durability of some of the actions we’re taking,” and the only effective answer to those questions is U.S. actions, not words. The United States is the only country in the world with the assets capable of supporting military counterterrorism deployments over time, including key support functions such as airborne refueling, transport and logistics, and intelligence, surveillance and reconnaissance (ISR). In the words of one European official, “The enabling capacity of the United States is monumental.” Coming on the heels of the Trump administration’s unsteady commitment to allies like the Syrian Kurds, Washington’s allies may well worry that this or another U.S. administration could once again suddenly reverse course. Addressing this credibility gap will therefore require that U.S. actions are accompanied by clear diplomatic commitments.

The United States will also have to invest in building partners’ capacity so that they can gradually assume more roles. In this formulation, any real burden sharing will have to be preceded by burden shifting, a process that will allow partners to develop their own capabilities. Traditionally, moreover, the allied commitment to military counterterrorism missions decreases when the U.S. decides to pick up and leave. This calls for maintaining small American advise-and-assist efforts to support partner-led missions like Operation Barkhane in Africa’s Sahel region. Some 5,000 French forces are deployed under this operation, fighting terrorists alongside the armies of the G5 Sahel (Mauritania, Mali, Chad, Burkina Faso, and Niger). The Niger-based U.S. contingent consists of 800–1,000 personnel serving in support roles, with aerial missions generally flown out of bases outside Africa. “With very few assets, the United States are [sic] providing asymmetric value not only from a tactical viewpoint, but also in terms of its strategic effect,” a U.S. Defense Department official explained. Over time, Washington significantly reduced the number of troops deployed for this mission and European forces have filled the gap. One area where U.S. support remains critical is ISR from drones operated out of Niger.

Of course, counterterrorism burden-sharing may not always be possible. Even close partners who share a common overall sense of terrorist threats may prioritize them differently, or apply a different risk/reward calculus for any given action. But America’s closest allies tend to seek its partnership. “There might be some level of post-traumatic stress disorder” as a result of the Trump administration’s isolationism, unilateralism, and impulsive withdrawals in places like Syria, a European official explained. “But at the end of the day, all Europeans want a strong security partnership with the U.S. The question is whether this cooperation will be limited to core missions (sharing information about terrorist networks) or if we can move beyond this and together address the breeding grounds of terrorism and stabilization missions (Syria, Iraq, the Sahel).” The key to making the latter development more likely may come down to the United States revisiting its traditional reluctance to share decision making with its European partners, and European partners revisiting their traditional discomfort over burden sharing.

In his interim guidance, Biden made clear his intention to “revitalize America’s unmatched network of alliances and partnerships” to meet today’s challenges. He has the right idea, but the only way to revitalize America’s alliances is to restore America’s credibility as a reliable partner. It is time to step up and do so.