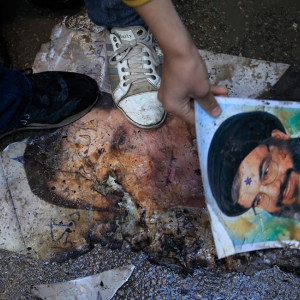 although many observers understand the indispensable role Iran has played in ensuring the Assad regime’s survival, they may not be aware of its stunning breadth or historical roots. Tehran’s dominance over Damascus did not develop overnight or through military means alone—it was built over years of gradual religious and socioeconomic infiltration inside Syrian seminaries, congregation halls, academic institutions, housing projects, and other venues. Any U.S. plan for fostering peace and stability in Syria will therefore require determined efforts to blunt this wide-ranging Iranian influence.

To discuss these issues, The Washington Institute hosted a virtual Policy Forum with Nakissa Jahanbani, Mehdi Khalaji, and Oula Alrifai, author of the new Institute study “In the Service of Ideology: Iran’s Religious and Socioeconomic Activities in Syria.” The event was moderated by Institute executive director Robert Satloff.

Oula Alrifai is a fellow in the Institute’s Geduld Program on Arab Politics and a former political asylee from Syria. Her master’s thesis at Harvard University, “The Self-Flagellation of a Nation,” focused on regime survival and the development of Iranian-Syrian relations in the 1970s and 1980s. She is also the executive producer of an award-winning documentary on Syrian refugees, Tomorrow’s Children.

Nakissa Jahanbani is a researcher at West Point’s Combating Terrorism Center and an assistant professor in the academy’s Department of Social Sciences. At the center, she investigates Iran’s network of proxies, with current projects focusing on groups in Syria, Iraq, and the African continent. Her dissertation work included quantitative analysis of state relations with insurgent groups.

Mehdi Khalaji is the Libitzky Family Fellow at The Washington Institute. A former Qom-trained theologian, he has also worked as a political analyst for BBC Persian and a producer for Radio Free Europe/Radio Liberty’s Persian-language programming, among other outlets.