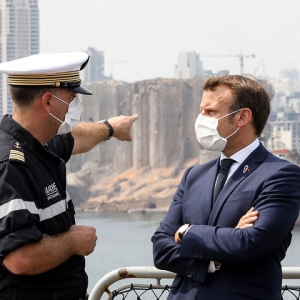 on April 8, a delegation of German companies presented the Lebanese government with an initiative to underwrite reconstruction of Beirut port. The proposal had been mentioned days earlier by German diplomats, who indicated that it would be contingent on Lebanon’s formation of a new government and implementation of reforms. Rebuilding the port is critical to the state’s recovery—its destruction last August was the coup de grace to Lebanon’s already teetering economy, triggering massive currency devaluation, hyperinflation, and an unemployment spike. A major shortage of much-needed consumer goods followed as well, since the devastated site had been the entry point for 80 percent of the state’s imports.

Although the German announcement is unlikely to spur Lebanon’s hapless political elites to action, it may rile France, which also aspires to rebuild the port. During his visit to Beirut shortly after the blast, President Emmanuel Macron reportedly expressed interest in the undertaking. Accompanying him on that trip was Rodolphe Saade, chairman of the large shipping and logistics firm CMA CGM Group. Saade subsequently tweeted, “France and Lebanon will be able to count on the Group to respond to the emergency and work to rebuild Beirut. Our mobilization is total.”

No doubt Paris is interested in French companies mobilizing to secure contracts for the port’s reconstruction—but only if someone else is paying. The French government has given no indication that it intends to underwrite the venture. Despite being heavily involved in the politics of its former colony, Paris provides surprisingly little financial assistance to Lebanon. For example, according to the Organisation for Economic Co-operation and Development (OECD), France gave the country just $45 million in bilateral development funding and $17 million in military aid in 2018. In contrast, Germany gave more bilateral aid that year—$67 million—despite not traditionally being a player in Lebanon.

To be sure, both states also make additional contributions via EU assistance funds. And Germany has proposed to finance the project—at a cost of $2.36-3.54 billion—through the European Investment Bank, which implies participation by other EU states, including France.

Whoever winds up funding the project, the good news is that Paris and Berlin have both made clear that moving ahead with the plan and/or backing a wider multi-billion-dollar IMF bailout will require Lebanon to undertake serious reforms and curtail endemic corruption. This is a tall order, of course: Lebanon ranks 149th out of 180 countries in Transparency International’s Corruption Perceptions Index, and its leaders have never embraced reform. In fact, most elites—especially those representing the Iran-backed militia Hezbollah—profit immensely from the current system.

Parallel to these onerous requirements on Beirut, other foreign actors with perhaps more financial clout than France and Germany have laid down their own prerequisites. In December, the World Bank spelled out the reforms that Beirut would need to implement before the port can be rebuilt, such as establishing a new institutional framework for the port sector, enacting relevant new legislation, reorganizing the customs administration, ensuring a competitive bidding process, and using private terminal operators. The United States has its own sine qua non as well—that Beirut consent in advance to independent monitoring of the new port in order to ensure it does not once again become a Hezbollah asset for trafficking military materiel and personnel. Paris and Berlin may not insist on this monitoring prerequisite, but Washington might have more sway given its larger annual contributions—in 2018, for instance, it gave Beirut $118 million in development aid and $128 million in security assistance, in addition to large contributions to the UN World Food Programme and other institutions that work in Lebanon.

Another potential silver lining is that any French-German involvement in the project would presumably preclude China—Hezbollah’s partner of choice—from adding to its so-called “string of pearls” global port network. Given its practice of targeting vulnerable states for investment debt traps, Beijing no doubt views a compromised Lebanon as an attractive option.

At the moment, the French and German proposals are a sideshow to Lebanon’s slow-motion collapse, but the fact that both governments share Washington’s articulated commitment to conditioning non-humanitarian assistance on reform should be seen as a U.S. policy opportunity. Ultimately, there is ample room for European collaboration on financing and rebuilding the port, and Washington should work closely with each country to ensure that the project—if and when it moves forward—is coordinated multilaterally and bound to the principle of reform before reconstruction. In contrast, Beijing’s aversion to transparency and its ambivalence toward Hezbollah would make a Chinese role in reconstruction a worst-case outcome for Europe, the United States, and Lebanon alike.

David Schenker is a senior fellow at The Washington Institute. From 2019 to January 2021, he served as assistant secretary of state for Near Eastern affairs.