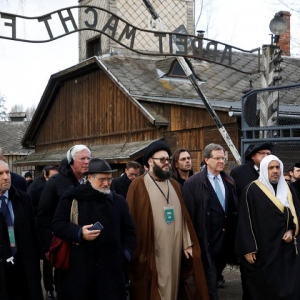 for decades, many Arab governments and societies celebrated Holocaust denial and distortion, partly to complement their conflict with Israel and partly to keep pace with the spread of extremism. More recently, however, a series of dramatic changes in the Middle East—from diplomatic openings with Israel to new initiatives for fighting extremism through interfaith tolerance—have triggered curiosity about the Holocaust and made discussion of its history and broader genocide awareness more legitimate and mainstream in many Arab countries.

On this year’s Yom HaShoah/Holocaust Remembrance Day, The Washington Institute hosted a remarkable panel of Arab educators, activists, and civic leaders for a virtual conversation about teaching the Holocaust in the Arab world, moderated by Institute executive director Robert Satloff.

Ali al-Nuaimi is chairman of Hedayah, the UAE’s leading institution in the fight to counter violent extremism.

El Mehdi Boudra is founder and chairman of Mimouna, an organization of Moroccan Muslims committed to preserving the culture and heritage of the country’s Jewish community.

The Policy Forum series is made possible through the generosity of the Florence and Robert Kaufman Family.