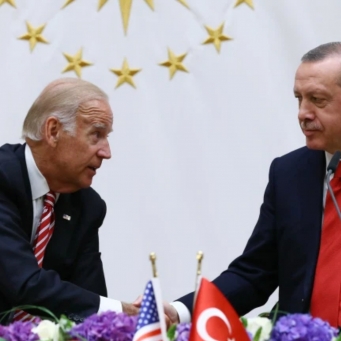 Simmering tensions in Turkish-US relations have heated up as the Biden administration moved into the White House promising a wholesale review of US foreign policy. For Ankara, worrying signs began to appear last summer, when candidate Joe Biden railed about President Recep Tayyip Erdogan’s policies and said that the United States should strengthen its contacts with the Turkish opposition. Biden’s foreign policy staffing choices have set off further alarms. His secretary of state and national security advisor are both known for their criticisms of Turkish foreign policies. His coordinator for Middle East policy (and Biden himself) has previously voiced support for the establishment of an autonomous Kurdish administration in north-eastern Syria, which Turkey adamantly opposes.

In truth, Turkish-US ties have been under increasing strain since the Obama era. A major sticking point for Turkey is US support for the Syrian Democratic Forces (SDF), whose fighting force consists primarily of the People’s Protection Units (YPG), an arm of the Kurdistan Workers’ Party that has been at war with the Turkish state since the 1980s. Although President Barack Obama personally assured Erdogan that the US would back Kurdish factions in Syria only until the Islamic States (IS) was defeated, it continues to provide military and financial aid to the SDF over Turkey’s strenuous objections.

For its part, the Biden administration seems to view Turkey’s growing, muscular role in the region with trepidation, whether it is its gas exploration efforts in the eastern Mediterranean, support for the Libyan or Qatari government against military offensives or blockades, protection of its southern border and Syrian civilians, or assistance to its Azerbaijani ally. The Biden administration is also likely concerned by Turkey’s increasing economic cooperation with China.

Facing the prospect of a troubled relationship with the Biden administration, Turkey has recently shown its readiness to pursue a more conciliatory course with its neighbours and the European Union, but this does not mean it is willing to abandon its allies or its vital national interests. It will not retreat from Libya, Azerbaijan, Qatar or the eastern Mediterranean and will certainly not abandon its opposition to a Kurdish entity in northern and northeast Syria. Given these parameters, Turkish-US relations could unfold along several trajectories.

Many believe that in light of the complexities of the Iranian nuclear issue and Washington’s turn to a more direct confrontation with Russian geopolitical power and Chinese economic might, the Biden administration will avoid inflaming its relationship with Turkey. But this may be wishful thinking. Statements from US officials suggest that the Biden administration harbours more general, ideological concerns about Turkey’s rise.

The US-Turkish alliance emerged during the Cold War under the Truman doctrine, when Turkey was a vital, but unquestionably weaker partner, economically and militarily. But Turkey is no longer a junior partner. Having built a strong economy, a diverse military industry and a network of regional alliances, it feels more confident and independent and less reliant on its Western allies. In turn, this has had a tangible impact on its relations with the United States and the NATO alliance as a whole.

The situation suggests a need for a US-Turkish strategic dialogue that is fully cognizant of post-Cold War changes in Turkey’s own view of itself and its role while giving due consideration to US interests, Ankara’s persistent fears of US interference in Turkey’s affairs, and the adverse implications of strained ties for Turkey’s position and interests. This could spur a comprehensive re-evaluation of the US-Turkish alliance that could free both states of the legacy of the Cold War and lay the foundation for a long-term partnership based on a pragmatic vision of the two countries’ interests. Only in this way can a healthier relationship be built that is better able to deal with emerging disputes between the two countries.