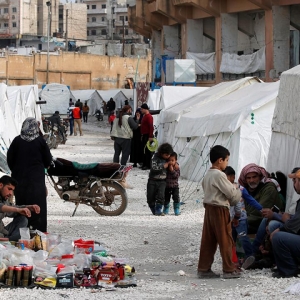 on April 20, The Washington Institute held a virtual Policy Forum with Jennifer Cafarella and Sasha Ghosh-Siminoff, moderated by journalist-in-residence Kenneth R. Rosen. Cafarella is the national security fellow at the Institute for the Study of War and a visiting fellow at George Mason University’s National Security Institute. Ghosh-Siminoff is executive director and cofounder of People Demand Change Inc., a startup that focuses on monitoring and evaluating humanitarian aid and development programs in the Middle East. The following is a rapporteur’s summary of their remarks.

Jennifer Cafarella
Syria will remain a warzone for the near future because no one has the strength to win outright, and because the Assad regime has spoiled the diplomatic process. As a result, there is no straightforward way to resolve the conflict, leaving the region with great uncertainty about its economic future.

For Washington, the question of which partners to work with is key. Some have suggested offloading certain responsibilities to Russia, but that would be a mistake. Moscow is in Syria to exert leverage over NATO. In addition to obstructing stabilization, its presence has helped the Assad regime seize aid intended for the northeast.

The roughly 900 U.S. military personnel in Syria have achieved remarkable things in the territory where they work, including sustained pressure on Islamic State remnants in the east. In contrast, Russian areas of responsibility have seen a much worse IS resurgence. Even so, a low-level IS assassination campaign is driving social tensions and degrading governance in territory held by the Kurdish-led Syrian Democratic Forces (SDF), creating opportunities for Russia and Assad to expand their reach and, perhaps, make the U.S. military position untenable over the long term.

The SDF have an impossible task under the present circumstances. Spread thin and facing heavy pressure, they will not be able to sustain what they are doing if the U.S. presence is removed. Despite being Kurdish-led, their coalition has been resilient against ethnic fractures. They do tend to prioritize aid toward Kurdish areas in the north, but their overall work to meet local needs has been impressive. They have a genuine commitment to Arab communities in Deir al-Zour province, and their coalition is viable in the long term, at least in some sense. Yet U.S. and international support is crucial, otherwise the SDF can do little more than limp along. In particular, more civilian U.S. presence is needed, not just military.

The Trump administration wanted to cut and run from northeast Syria, yet the consequences of that would be severe. If IS gains territory again, the situation will become even messier than last time. The United States should have learned its lesson about leaving too early given what happened with the 2011 Iraq withdrawal, but it appears to be repeating that mistake in Afghanistan and potentially again in Syria.

Regarding aid, U.S. officials should fight to preserve the international cross-border mechanism. But if they lose that vote, they should work with Turkey to maintain aid to northeast Syria. Keeping Idlib from being choked off is important, but cross-border aid needs to be expanded beyond that area.

For its part, Turkey still has many unresolved issues with the SDF—the withdrawal of foreign personnel affiliated with the Kurdistan Workers Party (PKK) is a particular sticking point for Ankara. Turkish officials have asked for numerous concessions, and Washington has to find a middle ground. The Turks are flexible, however, and U.S. leverage has been known to change their behavior—for instance, the threat of sanctions spurred Ankara to call off an offensive in 2019.

The question of internally displaced persons is also increasingly urgent, from both a humanitarian and counter-IS standpoint. The flow of IDPs back to the Euphrates River Valley is a problem given that area’s poor conditions and dire economic prospects. They are being forced back into their communities before they are ready.

Sasha Ghosh-Siminoff
The economic situation in SDF territory varies. Some areas were liberated much earlier than others, creating a gradient of recovery. In addition, the war has greatly diminished traditional connections between local economic hubs. Cross-river trade used to thrive in Deir al-Zour but now is minimal. Such activity has instead been redirected toward the Kurdistan Region of Iraq (KRI), forcing the SDF to grapple with new economic mechanisms while dealing with security issues at the same time.

For example, the roads available for trade tend to run through sparsely populated rural areas, where IS and Assad regime forces can take advantage of travelers. Such interference often impedes service provision, which in turn creates discontent. Moreover, while the United States is focused on Deir al-Zour, the humanitarian sector is focused on Hasaka province, highlighting the gaps and lack of coordination between international donors.

The Autonomous Administration of North and East Syria (AANES) has undergone deep structural change, moving from cantons to provincial-style organization. Authorities have been incorporating territory selectively, basing their decisions on varying circumstances. Substantial connective tissue has been formed between Raqqa, Kobane, and Hasaka, but political compromises have resulted in much more autonomy for Deir al-Zour.

In other words, the bureaucracy is complicated, and getting work done requires talking to lots of different people. But each province has something the others want, so none of them can go it alone. Hasaka has wheat, but it lacks water because the Khabur River is dry or otherwise unusable. Deir al-Zour has both water and oil, so Hasaka has been pumping water from there for irrigation. Raqqa, meanwhile, is a key trading center.

On the UN side, lots of partners have emerged to address the acute humanitarian crisis, but COVID-19 continues to cause major problems. Rolling lockdowns have been instituted recently because communities lack the healthcare infrastructure to confront the pandemic in any other way.

Cross-border trade is therefore a key lifeline. The KRI has significant social, cultural, political, and economic connections to northeast Syria—for better or worse, the two areas will always be linked. Cross-border aid is substantial, but the KRI’s semi-autonomous status is not the best setup for such assistance from a legal standpoint. If the Iraqi federal government wants to get involved, it will need to get al-Yarubiya crossing reopened.

For wider stabilization and reconstruction to take place, U.S. force protection is essential. Washington therefore has leverage over the timing of those processes. For instance, if it commits to keeping military forces in place for five years, then all actors would be compelled to work within that calculus—with some presumably committing to tangible investments in response. Similarly, U.S. agencies could internally commit to certain types of programs that operate on a five-year basis.

Although northeast Syria has enough natural resources to sustain itself, at some point it will need a tax base, which it cannot cultivate without local buy-in. That is the route authorities should take, including more concrete import/export duties. Cross-border aid must be expanded as well; relying entirely on the Peshkhabur crossing is insufficient.