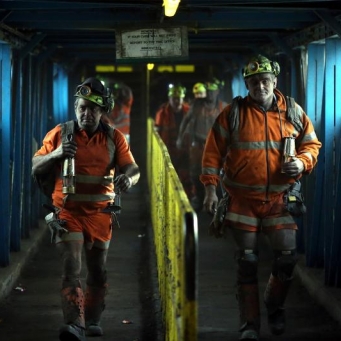 In a dramatic move for global efforts to combat climate change, the European Union last week laid out an ambitious proposal to transition away from fossil fuels. Brussels’ announcement marks the latest step in a rapidly accelerating green revolution. Driven by a stunning reduction in the cost of renewable energy systems and an unprecedented drive for carbon neutrality, the world finally has a real chance to tackle climate change. But even though decarbonization is essential to humanity’s survival, the transition will have profound economic effects—as the EU proposal acknowledges. Although it will be a net benefit for the world, the transformation will create winners and losers. Moving from fossil fuels to renewable energy will inevitably displace long-established industries, cost millions of workers their jobs, and disrupt communities that rely on the coal, oil, and natural gas industries.

Stay informed.
In-depth analysis delivered weekly.
FOLLOW THE EMISSIONS
The world is in the midst of a climate emergency. Global temperatures are already one degree Celsius above preindustrial levels. That’s just one-half degree less than the level at which climate scientists calculate that dramatic environmental change will begin to set in. Annual global greenhouse gas emissions, moreover, are rising steadily and show no sign of peaking: in 2019, they were 62 percent higher than in 1990, when the first Intergovernmental Panel on Climate Change (IPCC) urged coordinated action, and four percent higher than in 2015, when 174 countries and the European Union signed the Paris climate accord. Although 2020 saw an unprecedented drop in carbon emissions owing to COVID-19 lockdowns, rates have already begun to rebound sharply in 2021.

According to the IPCC, governments now have only 30 years left to radically slash global emissions before the planet faces a series of dangerous tipping points. The Amazon basin could soon morph from tropical forest to savanna, and billions of tons of carbon will begin to leach from Siberia’s permafrost. Some regions—eastern Brazil, Southeast Asia, the Mediterranean, and central China, among many others—will inevitably face multiple climate calamities at once, including drought, heat waves, cyclones, wildfires, and flooding.

This compressed time frame means that any successful climate policy must be intrusive. States will need to rapidly overhaul their energy, transport, residential, and agricultural sectors—sparking difficult questions about who should shoulder the enormous costs.

The actions necessary to stave off environmental disaster will lead to job losses and business closures.
Stark disparities in the level of carbon that different countries emit make these questions particularly difficult to resolve. According to Oxfam and the Stockholm Environment Institute, between 1990 and 2015, the wealthiest ten percent of the world’s population accounted for over half of global greenhouse gas emissions. The richest one percent alone was responsible for 15 percent of emissions during the same time frame—more than twice that of the poorest half of humanity. That latter group, however, is far more likely to suffer the worst effects of climate change, including floods, drought, disease, or economic dislocation. Comparatively poor communities will bear the brunt of a crisis they did little to cause.

Had the proposed carbon tax included a mechanism to cushion the economic blow, the government might have avoided a backlash. Instead, an energized populist movement managed to roll back a central element of France’s efforts to combat climate change; President Emmanuel Macron suspended the tax just three weeks after the protests began.

DIVIDEND AND CONQUER
The yellow vests phenomenon served as a warning—and many took note. In 2019, a group of economists—among them 28 Nobel laureates and four former U.S. Federal Reserve chairs (including Janet Yellen, who now serves as U.S. Treasury secretary)—called for a tax on carbon emissions in the United States, with revenues returned directly to citizens through equal lump-sum payments. Under this proposed system, ordinary consumers—including the most vulnerable—would receive more in so-called carbon dividends than they would pay in increased energy prices. The new EU plan includes a similar proposal—the so-called Social Climate Fund—designed to divert a portion of new carbon tax revenues to those most affected by rising energy prices.

The European Union, for its part, has thus far taken a narrower approach to the problem. As part of its 2019 European Green Deal, the EU focused on helping specific regions transition away from carbon-intensive industries—especially coal production. Instead of nationwide reimbursements, these “just transition” policies seek to diversify local economies and help workers adapt to a changing labor market. In Poland’s coal-mining regions, for instance, EU funding supports retraining programs, infrastructure investment, and assistance for workers who would otherwise be left behind in the transition to renewable energy.

The path to carbon neutrality depends on governments’ ability to turn decarbonization into an opportunity.
The first half of 2021 saw a record-breaking spike in the prices Europeans pay for electricity, owing to a rally in natural gas prices and a record-breaking spike in the cost of European carbon emissions. Although energy companies initially pay these high rates, they ultimately pass the increase on to consumers. This put the idea of a broader EU carbon dividend back in the spotlight. European Commission President Ursula von der Leyen declared in May 2021 that the EU would need to compensate lower-income Europeans. “Additional costs for CO2 savings have to be borne by those with stronger shoulders,” she noted.

President Donald Trump scaled back Obama’s initiatives, but President Joe Biden has reversed course, broadening his administration’s ambitions to include the concept of “environmental justice,” alongside more conventional programs meant to assist regions reliant on coal, oil, and natural gas. An environmental justice framework acknowledges that climate change and ecological degradation often have the greatest impact on people of color, tribal lands, and low-income communities.

As part of these efforts, the Biden administration recently announced its Justice40 Initiative—designed to direct 40 percent of government climate investment toward disadvantaged communities. Biden’s $2 trillion infrastructure proposal, the American Jobs Plan, incorporates this initiative and addresses several separate environmental justice issues, including the impact of pollution on low-income communities. Among other projects, the plan includes proposals to modernize transportation systems, water and electricity infrastructure, and parts of the manufacturing sector—especially in rural and vulnerable regions.

START YOUR ENGINES
Biden’s policies are a good start. But leaders in Washington and other capitals need to go much further if they want to establish an effective climate safety net. The Biden administration’s plans, for example, do not yet officially include a federal-level carbon-pricing system—a centerpiece of European efforts to reduce emissions and the starting point for a true carbon dividend. According to U.S. Special Presidential Envoy for Climate John Kerry, however, Biden apparently believes that Washington will need to implement a similar system at some point in the future.

As more governments begin to take dramatic action on climate change, they must keep an eye out for the social implications of their policies. If they fail to take the needs of their most vulnerable citizens into account, leaders’ best intentions may come to naught. Ultimately, the path to carbon neutrality depends on governments’ ability to turn decarbonization into an opportunity. If implemented correctly, a climate safety net can help make that a reality through good jobs and a more inclusive economy for all.