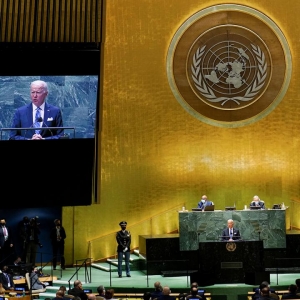 in his first speech to the United Nations General Assembly as president, Joe Biden on Tuesday showed no sign of regret for his hasty withdrawal from Afghanistan, despite the Taliban retaking the country virtually unopposed as the Afghan military, lacking the U.S. support it had previously relied on, swiftly collapsed.

The United States will no longer “fight the wars of the past,” Biden proclaimed. He emphasized that he plans to use diplomacy and multilateralism wherever possible, since, “Today, many of our greatest concerns cannot be solved or even addressed by the force of arms.”

Yet he also stressed his commitment to supporting allies, saying the U.S. will continue “working in cooperation with local partners so that we need not be so reliant on large-scale military deployments.” He didn’t seem to realize that the effort of the past he rejected in his speech was the very work with allies that he also embraced.

Instead of fixating on “forever war,” we need to understand that a limited U.S. presence in foreign countries is an important component of “forever peace” at home. Indeed, having established standing forces in Germany, Japan and South Korea for decades to support those countries’ development, democratization and defense against shared adversaries like Russia and China has benefited U.S. national security.

The relationship between the U.S. military and its partners in the 2014–2019 war against the Islamic State militant group can serve as a model for the shift in attitude that is needed. In Iraq, as ISIS rapidly seized territory in 2014, the United States countered with airstrikes and eventually deployed over 5,000 troops, mostly to train and enable the Iraqi security forces (the Iraqi national military and police) and Kurdish peshmerga (the military for the autonomous Kurdistan Regional Government in northern Iraq) to roll back the ISIS advance. The additional inauguration of the Global Coalition to Defeat ISIS pooled the resources of U.S. allies and further boosted Iraq’s defenses. The intelligence, tactical advice and air and logistical support the coalition provided were essential for enabling the Iraqis to roll back ISIS’ territory.

Today, the coalition and Iraqi security forces effectively restrain the remnants of ISIS with only 2,500 U.S. troops deployed, mostly still training and advising Iraqi forces away from the battlefield rather than participating directly in combat operations. The most effective element of the Iraqi military is the U.S.-created and trained counterterrorism service, which served as the spearhead for all major battles against ISIS in Iraq.

The United States forged similar relations with the Syrian Democratic Forces, the predominantly Kurdish militia operating in northeast Syria that seeks primarily to secure autonomy from Syrian dictator Bashar al-Assad. In late 2014, when ISIS seemed poised to take the town of Kobani near the Turkish border and roll through the rest of northeast Syria, over 600 coalition airstrikes killed as many as 6,000 jihadis and enabled the Kurds to retake the area. Coalition assistance then allowed our Syrian allies to prosecute the bulk of the ground war to liberate ISIS’ Syrian territories, including the ISIS “capital” of Raqqa. The Syrian Democratic Forces now hold much of northeast Syria and continue to regularly execute counterterrorism operations with coalition support, keeping ISIS at bay. Through early 2019, the number of U.S. special forces deployed to assist the Syrian Democratic Forces didn’t exceed 2,000.

In both Iraq and Syria, our partner forces showed great willingness to fight, even at a heavy cost, when properly supported with training, intelligence, operational advice and air power. The Syrian forces reported over 11,000 of its fighters killed in the war against ISIS through 2019, and the Iraqi forces sustained an estimated 12,000 fatalities through July 2017, when the most intense fighting in Iraq ended. In the process, they stopped ISIS from committing further atrocities and promoted human rights and civil society in their territories. The toll for the United States has been 108 deaths to date and some $14 billion from August 2014 to June 2017.

When it comes to Afghanistan, Biden and other critics of the war have focused on how quickly the Afghan army, which the U.S. spent two decades building up, succumbed to the Taliban and collapsed. They pointed to that as evidence that American troops were risking their lives in a hopeless cause. The day after Kabul fell in mid-August, Biden defended his decision to pull out of Afghanistan by asking, “How many more generations of America’s daughters and sons would you have me send to fight Afghans—Afghanistan’s civil war—when Afghan troops will not?”

But the Afghan army had proven it was willing to fight the Taliban despite the high price. From 2001 through April, about 66,000 Afghan military and police members were killed in Afghanistan, alongside 2,448 U.S. service members. At the same time, joint U.S.-Afghan military operations, particularly when involving elite American-trained Afghan commandos, kept the Taliban on its toes and mostly out of major population centers. When ISIS appeared in Afghanistan in 2015, the established U.S. presence on the ground enabled quick countermeasures, including airstrikes and joint U.S.-Afghan commando raids, that significantly reduced the group by early 2017. The abrupt U.S. exit from Afghanistan likely forced the Afghan military to fight under unfamiliar conditions, ultimately leading to collapse—and the humanitarian catastrophe we are now witnessing.

The fall of Kabul should be a warning of what might happen if U.S. troops withdraw from Iraq or Syria. Our military allies in both countries simply do not know how to fight effectively on more conventional battlefields without U.S. support. Thus, Biden should publicly reaffirm his administration’s support for our Middle Eastern allies and make clear that the withdrawal from Afghanistan does not signal an intention to pull out of Iraq and Syria, too.

In Europe, American troops support the militaries of NATO members and deter Russian aggression. U.S. forces in South Korea, Japan and the Pacific boost the defenses of our East Asian allies against potential attacks from authoritarian North Korea and China while safeguarding Taiwan’s sovereignty.

In the Middle East, the danger to individual troops is greater, since American forces operate in active conflict zones—but they do so in much smaller numbers (around 8,100 compared to the more than 145,000 in Europe, East Asia and the Pacific) and for similar purposes of protecting democratic allies’ independence as well as countering terrorist groups, with partner forces taking on the bulk of the fighting.

Indeed, if we are willing to maintain huge troop numbers to support our allies in Europe and East Asia, then why not even a small footprint in the Middle East? We have a duty to continue to at least make this small commitment to our allies. It is time we begin treating our partners as our friends—be they European, East Asian, Afghan or Middle Eastern—to prevent events like the fall of Kabul from repeating.

Ido Levy is an associate fellow working with the Institute’s Military and Security Studies Program. This article was originally published on the NBC News website.