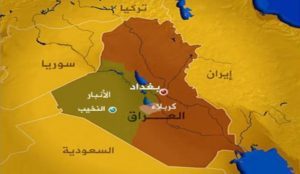 Nineveh military operations continue to implement the tasks entrusted to it in progress within the main  axes  identified  for it but  they  are  stumbled  from time to time due to several factors, the most important of them  are  the basic defenses  made by Daesh fighters in front of the  attacking military and security forces   in addition to the lack of the ability of some of the attacking forces in  the implementation of the tasks entrusted to it because of the weakness  of the  military plan or lack of  accurate field vision  of what is happening on the field and the weakness of  anticipation in  the calculations of the existing defending force  in the city of Mosul, combined with the lack of ability to continue to attack and progress in residential neighborhoods because of the population density and the presence of the local population and their determination not to leave the city and  their  houses  and their shops and markets, and for these reasons  the international coalition  proceeded on a field and a detailed study to develop the finishing touches to the second phase announced in the face of the elements of fighters Daesh having developed before itself  the fact  of the results achieved on the ground and studied the negatives that accompanied the start of military operations and put in mind the amount of human and material sacrifices and losses made by the Advanced Iraqi forces  , especially in the eastern axis, which is supervised by  ant-terrorism command   and with the participation of the  fighters of the gold division .

With all this anticipation and the development of alternative military plans there are partisan  entities and  political blocks  have its own  interests and its  political, intellectual and social vision of how to address the situation away from  field military clashes and confrontations ,  we mean the movements and blocs and political parties participating in the political process or out of the process.

These entities  proceeded   to put its  vision and the announcement of its objectives and field plans  after the completion of the military confrontations with the leaders and fighters of  Daesh especially in the city of Mosul  and this comes coinciding and in conformity with   all developments in the field  confrontation arena  related  to the   main axes   of the military sector of  the Nineveh  operations .

That is why we have begun to hear and read and watch the conferences, meetings and consultations held here and there and run in the corridors of councils and political meetings on the topic of the future of Iraq  included    political initiatives  and  field  ideas and proposals , but we have not touched any sign of blessing nor a clear project and a full program  that identifies  paths  of the next situation in the country which   these meetings and consultations  were held for it .

And if  those  officials and responsible men  for these initiatives and conferences  were  serious in the development of a real brick and correct and solid  foundations  to solve Iraq’s problems , the matter would be achieved  , but all we see is the voices in the air and  words uttered  here and there, and political speeches, press conferences, all away from the truth of the matter and tragedy experienced by Iraq and its people and the  dark future  that awaits  it , and indicates we have according to leaks which  come  from all of these meetings or conferences, the majority of those who made it have  their agendas and   political, regional and international ties  seeking from which to serve the self-interests and achieve their endeavors and political goals on  the account of their country and the lives and the future of their people .

As all their movements lacked the obvious political programs  and real field projects that shape the  solid foundations   to address the existing problems in addition to these meetings and  participations  do not  keep in the line of  the worries and problems and hardships suffered by the Iraqi people, but  go away from drawing a clear picture for the  painful reality experienced by Iraq and establishing the   partition  concepts  and  division and work to hit the national unity and the fragmentation of  coherent Iraqi fabric,

Such initiatives and meetings are  still away from establishing   a sincere  national project, which involves a clear political program that takes into account the problems of Iraq and the interests of his people, who endured the American occupation and still faces and suffers from the  Iranian influence and military conflicts on the territory and  political and  regional interventions who faces terrorism and defend their rights and existence of  deliberate and forced change of  human  demography and geography  by armed militias backed by the Iranian regime.

The question that arises is  the supporting of  the  displaced people, refugees and residents leaving  their areas that led to the loss of their property and the demolition of their  houses  and bulldozing their farms  more useful   according to  those  who are calling on these initiatives and political  projects and  self interests  ?  And what  can  be produced by those who  live  outside the event  and away from  it?