Shatha Khalil *
The water situation in Iraq is dangerous, and its problems and effects are great. Climate change has an impact on the environment of Iraq, the future of its water resources, and the geology of the Tigris and Euphrates rivers.
Iraq is suffering from an unprecedented water crisis fueled by a variety of factors. The troubled climate of the Earth has changed the hydrological situation in many areas, including the Middle East, which suffers from chronic water scarcity. Temperatures are higher than in other regions, rising decline in the rate of rainfall on it.
And the problem of the riparian states with Iraq on the Tigris and Euphrates – Turkey, Syria and Iran – are promoting projects in irrigation and construction of dams, without taking into account the impact on it.
Water shares were reduced on two sides, the first in the small Zab River cut by the Iranian authorities, and the second in the main branch of the Tigris River, which feeds central and southern Iraq through the Mosul Dam because of the start of Turkey filling the Ilisu dam.
Iraq lacks a strategic plan for water management, despite the claim of the Ministry of Water Resources of its existence, with no evidence of its existence and application, and the Ministry is not making any effort to secure Iraq’s water quotas.
Crisis in Mesopotamia are intertwined. The water crisis is exacerbated by the large number of illegal ” exceeding ” fish breeding that account for more than a quarter of the water-wasting quantities that belong to Iraqi government officials and are getting large amounts of fresh water through overriding the irrigation channels .
The successive local governments in the Iraqi provinces lack strategic plans, lack of modern irrigation channels, administrative units are deficient in its work to eliminate exceeding on water quotas , and ” negligent ” in removing fish ponds that exceed water quotas.
In Kirkuk, the director of the agriculture office in the province, “Mahdi Mubarak,” said that all the ponds that have official license from the Department of Agriculture are (41) ponds for fish farming only, and from 1987, the Directorate of Water Resources in the province of Kirkuk has not established any pond for fish farming in the province due to lack of water.
He added that there are about (400) exceeded basins for the fish farming in Kirkuk, stressing that the Department of Agriculture does not give any permission to establish ponds, pointing out that all the ponds that were established in Kirkuk during the previous years all exceeded.
Mubarak added that the Ministry of Agriculture calls for lifting these abuses, and most of the basins that have been established, exceeded the Kirkuk water project, knowing that the basis of the project for human use, and to irrigate agricultural land and not to fish farming.
Mubarak pointed out that the fish farming ponds should not be established in agricultural land so as not to affect agricultural production, affect the water quota allocated to the governorate, and we have informed the owners of the ponds to remove the exceeding.
It is noteworthy that the Ministry of Agriculture decided to prevent fish farming in Kirkuk, and to remove all exceeded fish ponds.

In the province of Babil, MP Zaynab al-Taei, accused the governor (Sadiq Mdulul Al-Sultani) and hold him full responsibility for not removing the excesses on the rivers as a result of fish lakes, indicating that the local government is negligent with the owners of the lakes.
These lakes are in violation of the regulations and instructions, and were created illegally, have a negative impact on the distribution of water quotas, and the denial of large agricultural areas of irrigation, at a time when the country suffers from water crisis, especially the southern provinces.
The suffering of Basra is great as there are many , large illegal lakes for fish farming that are belong to influential officials in the state getting water by exceeding the irrigation channels where
the governor of Basra, Mohammed Taher al-Tamimi, said that the local government noticed that there are many lakes of fish farming getting large amounts of fresh water, by bypassing the Katiban irrigation channel , but the water of the irrigation channel is intended for watering plantations and household uses, and can not be allowed to waste it on large areas of land for the establishment of fish farming ponds.
Al-Tamimi added that the local government is going to take legal action against the owners of the lakes that bypass the irrigation channel, and that the Basra Operations Command has received instructions from the local government to combat the abuses of the canal, to ensure that the water reaches with sufficient quantities to the citizens.
In the same context, Al-Tamimi demanded the command of the operations of the Middle Euphrates and the Governor of Maysan Ali Douai to remove the excesses occurred over the water quotas that are being released from Nazem Qal’at Salih to Basra governorate. The quantities that come to the governorate are exceeded by some owners of lakes in Maysan, which are a few, and does not arrive in full to Basra causing not to push the salt tongue in the Shatt al-Arab, attributed the reason for the excesses of some fish pond owners in the province of Maysan on water quotas that are supposed to go to Basra to push the salt tide.
The Saline Tongue in Basra Governorate, which has been facing since 2007, the recurrence of problem in the salinity of the Shatt al-Arab waters during the summer due to the move of the saline tongue( saline front) from the Gulf to the Shatt area. This is due to the lack of water revenues coming through the Tigris, Euphrates, Karun and Karakha. The districts of Fao and Abu al-Khaseeb are in the south and the Shatt al-Arab in the east, the most affected areas of this phenomenon, where its residents complain strongly about the salinity of water, this serious problem was exacerbated by exceeded lakes .
Here , decisive action must be taken against those who are exceeding on water and the state must assume its full responsibilities in dealing with the abuses as soon as possible, and follow up and prosecute those who violate the law and consider them as issues affecting the security of the state in each of the provinces of Iraq, as they relate to the water resources in Iraq, that is, life in Iraq . 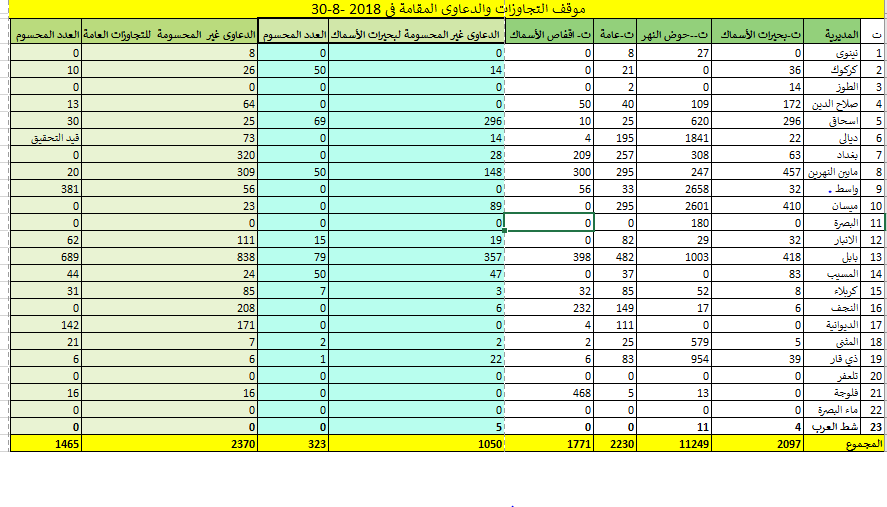