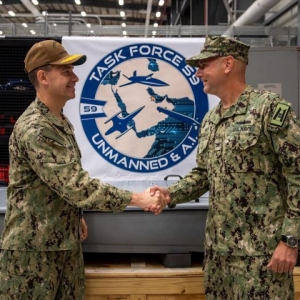 on September 9, U.S. Naval Forces Central Command announced that it was forming Task Force 59 (TF 59) to test new unmanned air, surface, and underwater technologies under the command of robotics expert Capt. Michael Brasseur. Part of a wider “netted fleet” experiment, the initiative aims to rapidly integrate advanced autonomous systems with maritime and littoral operations in the 5th Fleet’s area of responsibility, which encompasses the Persian Gulf, Strait of Hormuz, Gulf of Oman, Bab al-Mandab Strait, Red Sea, Suez Canal, and parts of the Indian Ocean. As the announcement noted, the Middle East is an ideally challenging and strategically appropriate environment for such innovation, with its semi-enclosed geography, high-temperature operating conditions, congested maritime chokepoints, and crucial energy infrastructure.

Iran has been quick to criticize the move, characterizing it as part of a wider U.S. conspiracy to “hand over” regional military responsibilities to other actors. According to a recent article issued by Nour News—an outlet reportedly affiliated with the regime’s Supreme National Security Council—Washington’s supposed intent is twofold: to install a “joint Gulf Arab-Israeli proxy force” at Iran’s doorstep (referring to Israel’s move from EUCOM to CENTCOM earlier this month), and to establish an Israeli cyber and surveillance station in the United Arab Emirates.

In light of such perceptions, Tehran will likely treat TF 59 operations as a serious threat and launch concerted efforts to hamper them with electromagnetic interference, cyber intrusions, and physical disruption. And given the unmanned nature of the force’s assets and activities, Iran may feel that it is immune from retaliatory measures if it captures or destroys them—a conclusion supported by its June 2019 shootdown and recovery of an advanced RQ-4A BAMS-D drone over the Strait of Hormuz, its capture of an RQ-170 Sentinel drone in 2011, and other incidents that failed to trigger a kinetic U.S. response..

Although the nature of TF 59’s activities and most of its platforms will remain classified, the following examples hint at what it could achieve:

Loyal wingman UCAV concepts—including the XQ-58 Valkyrie depicted on TF 59’s new emblem—could support manned aircraft operating in contested airspace. Iran’s increasingly capable air defenses remain heavily focused on the Persian Gulf, where they pose a significant risk to manned aerial operations. Such assets may even pose an offensive antiaccess/area denial (A2AD) threat to air and sea traffic around the Strait of Hormuz. Iran claims that its latest version of the Bavar surface-to-air missile will be even more capable than the Russian S-400, which has an engagement range approaching 400 kilometers. In such an environment, stealthy loyal wingmen could be operated alongside or in lieu of manned aircraft in air-to-surface operations, electronic warfare missions, and intelligence, surveillance, and reconnaissance operations. They could serve as pathfinders, flying ahead of manned aircraft during combat missions to probe enemy defenses. In other scenarios, networked drones could be used to swarm enemy radars and air defense positions, then attack them with kinetic means or electronic jamming.
Ultra-long endurance drones could offer persistent wide-area surveillance of Iran’s activities, including covert activities that are often hidden from less persistent or more localized surveillance. The MQ-9B Sea Guardian offers such capabilities, and the Vanilla Unmanned drone can provide up to ten days of coverage at a time. In the future, a solar-powered drone under development by the U.S. Navy will reportedly be able to stay in the air for as long as ninety days.
Small to medium unmanned surface vessels (e.g., Sea Hunter and Sea Hawk) and underwater vehicles could provide several valuable capabilities in high-threat environments, including silent surveillance and persistent anti-submarine and anti-mine options. These capabilities are particularly important in the hot, shallow waters of the Gulf region, where Iran has deployed significant mine warfare systems, midget submarines, and hostile IRGCN speedboats that put human operators at risk.
Iran Has the Means and Motive to Disrupt TF 59
In addition to Iran’s advantageous geographical position, potent missile capabilities, and proven willingness to take aggressive action, the country’s transformation into a regional drone power poses a serious challenge to U.S. interests in the area—a concern voiced repeatedly by CENTCOM commander Gen. Kenneth McKenzie. The regime sees the IRGCN as the tip of the spear in its confrontation with the West, often showcasing the force’s preparedness to challenge freedom of navigation through the Strait of Hormuz. Likewise, IRGCN commanders emphasize their constantly expanding combat capabilities—during the past year alone, for example, the force added at least six large batches of new armed speedboats and attack drones, with more to follow.

This combination of aggressive mindset and growing arsenal gives Iran both the means and the motive to closely monitor TF 59 operations—and perhaps disrupt them. In addition to the persistent surveillance assets scattered along its coast and islands (e.g., unmanned aircraft and electro-optical surveillance stations), Iran claims to have radar systems capable of detecting and tracking small and stealthy aerial vehicles. The IRGC is also known to have substantial electronic warfare and cyberwarfare capabilities in the south, and these should be expected to focus on TF 59.

Perhaps most significant of all, Iran will see the task force as a challenge to its newfound drone authority. After the IRGC captured an RQ-170 stealthy drone in 2011, it eventually produced numerous copies at different scales for a variety of missions. Once TF 59 is up and running, the IRGC will surely aim to get its hands on even more advanced, cutting-edge U.S. unmanned and autonomous platforms, whether to find counters against them, reverse-engineer them, score a propaganda victory, or all of the above.

Conclusion
The TF 59 initiative will give CENTCOM and its partners a concise naval combat and deterrent power with lower risk to human personnel. Yet the United States should prepare for the likelihood of repetitive threats directed at its unmanned assets, raising the need to draw clear lines beyond which it will take action against state and nonstate culprits alike.

In this regard, the lower loss threshold of such platforms may also be a partial disadvantage—that is, destroying or attacking them is less likely to trigger a forceful response, and Iran will no doubt be cognizant of this fact. The United States should therefore leave no room for interpretation, establishing clear rules of engagement and, if necessary, communicating some of these rules to potential adversaries. Iranian forces should be left with no doubt that Washington will treat provocations against manned and unmanned assets the same. Otherwise, any deterrent effects established by TF 59’s formation may quickly evaporate.