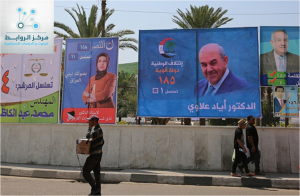 Iraqis vote on May 12 to choose members of the House of Representatives through a mixed ballot to ensure relative quotas, and the winning lists must form coalitions to obtain the majority necessary to form a government.
These elections are of great importance in view of the internal, regional and international situations. They come after the defeat of the terrorist organization ISIS and its loss of the areas it controlled in Iraq and the great loss of the Kurdish forces that organized a referendum on the independence of the region on 25 September 2017. And the constant thing in the Iraqi elections is to be held every four years and the remain of the Shiite bloc , the Sunni bloc and the Kurdish bloc as the components of the main scene, however the change is the disintegration of parties and alliances and the formation of new alliances to compete legally for power. This is the most important information on the electoral process, the fourth since the US occupation of Iraq on 9 April 2003:
– The number of Iraqi population: The Independent High Electoral Commission indicated which coordinates the electoral process that 24 million Iraqis out of the 36 million people, the number of Iraqi people are entitled to vote in the upcoming elections.
– Voters: More than 24 million distributed in 18 provinces, each representing an electoral district, in addition to Iraqis living outside the country and will vote in 19 countries.
– Candidates: 6982, including 2014 women.
– Election centers: 8148 polling stations in electronic voting, and 11 million electoral cards were distributed, according to government agencies.
– The displaced: 285 thousand will vote in 166 polling stations distributed in seventy camps in eight provinces.
– Seats: 329 seats, including nine for minorities, including Christians, Shabaks, Sabians and Yezidis, and 83 seats for women.
– The term: Four years.
– Method of voting: On the basis of the closed and open list, the closed list shall be voted in full without any choice. The open shall be cast on it or on a candidate or number of candidates. The votes shall then be distributed to the candidates according to their sequence within each list.

Coalitions and lists: participate in the Iraqi elections 86 coalition and list, the most important of which are:

First : The list of al-Nasir : It is headed by the current Iraqi Prime Minister Haider al-Abbadi. This list includes the large wing of the Dawa Party and civil and secular figures “Shiite, Sunni and Christian.” The list enjoys of electoral strength in view of the presence of the Iraqi Prime Minister Haider al-Abadi, who will represent it in Baghdad , on which the list of al-Nasir is likely to gain the most votes and the electoral strength of this list is also represented in the province of Basra by Iraqi Oil Minister Jabbar al-Alluaibi, who is known of professionalism and achievements achieved in his ministry along with the governor of Basra . In Nineveh the former Iraqi Defense Minister Khaled al-Obeidi will preside over al-Nasir list in it. The list will also have representatives in all governorates of Iraq, except the provinces of Kurdistan and Kirkuk. According to a poll conducted by the Rawabet Center for researches and Strategic Studies on a random sample in the Iraqi street about the potential parliamentary seats that will be won by each list. According to this poll, al-Nasir list is likely to get 55 parliamentary seats
second– al-Fatah list: headed by the head of the Badr Organization Hadi Amiri, and includes political wings of popular mobilization factions (al-Hashed al-Shaabi), and some Sunni figures belonging to him and close to his ideas. According to the poll mentioned above, the Fatah list is expected to get 43 parliamentary seats.
Third: The list of Saroon: It is headed by Mr. Muqtada al-Sadr. It includes personalities belonging to different ideologies such as the Communist thought. “This is an unprecedented step that may have an impact on the upcoming elections.” The Islamist, both Shiite and Sunni and liberal and according to the poll mentioned above, this list could get parliamentary seats ranging from 35 parliamentary seats. This coalition raises many questions, as the Sadrist movement is a Shiite Islamist movement that has 34 seats in the House of Representatives, and a number of ministers in the government, and had a strong armed organization until recently, while the Iraqi Communist Party has not changed its secular orientation, but entered into alliances with civil forces, but it and its allies did not have the support of the public enough to make a change at the parliamentary level that was held by the rest of the forces.
Fourth : The State of Law (Dawlat al-Qanoon ): It is headed by former Iraqi Prime Minister Nouri Kamal al-Maliki. This list includes political figures affiliated with the Dawa Party and the Dawa Party of Iraq, and Islamic and liberal figures. According to a poll prepared by the Rawabet Center, this list is expected to get 34 parliamentary seats.
Fifth : The list of al-Hikma movement : headed by Mr. Ammar al-Hakim, and includes Iraqi youth figures from different segments of Iraqi society, and what distinguishes this list possessing electoral tools and information of a highly professional in the electoral process, this advantage is not available in the competing electoral lists . What is noticeable on these lists is the dissolution of the ruling National Alliance and its distribution to individual lists led by strong contenders in one list, and this is not surprising, but one of the ABCs of political and electoral action, this list is expected to get 22 parliamentary seats.
Sixth: Al- Wataniya List: It is headed by Dr. Iyad Allawi. The list includes the Speaker of the Iraqi Council of Representatives Dr. Salim Al-Jubouri and Dr. Saleh Al-Mutlaq and some political, academic, liberal and some civil society figures. According to the poll, the list is expected to get 35 seats.
Seventh: The Kurdish lists: The Kurdish lists in the previous parliamentary elections are united, but they will lose this advantage because of the division in the upcoming elections, and the features of this division are as follows: the Kurdistan Democratic Party, which will not have a list in Kirkuk, where it is considered as an occupied territory by the federal government in Iraq. The absence of its presence in Kirkuk serves the interest of the other Kurdish lists, such as the list of Barham Salih and the list of Islamic groups and the list of change (al-Taghier) where each list will run the parliamentary elections separately in the provinces of the Kurdistan region, except for the province of Kirkuk on which they will run it in one list. As the KDP did not run elections in Kirkuk and Mosul, according to a poll conducted by the Rawabet Center, the Kurdish lists combined are expected to get 57 seats.
Eighth: Al-Qarar: it is expected to gain 10 parliamentary seats headed by Osama Najafi.
Ninth: Al-Hal bloc headed by Jamal al-Karbouli: it is expected to gain 12 parliamentary seats
Tenth: Other lists: Other small lists: These lists because of the electoral system “St. Lego” 1.7, all share with the Turkmen front does not exceed 16 parliamentary seats. Nine seats are reserved for religious minorities.

The coalition led by Haider al-Abadi is expected to be the largest bloc in the Iraqi parliament next year, especially after his success in leading the government over the past two years to end the control of ISIS on more than a third of the country and face the challenge of the Kurdish independence referendum. And with a clear satisfaction in the national and regional environment – a relative satisfaction to some extent – and almost all agree on a second term of the President Abadi to complete the stage of state building, through the detection of corruption, to put the corrupt in prisons, and his insistence on the establishment of fair public trials and the trial of those who colluded and neglected and being lazy and caused In the “setback” of June 2014. Some talk about the political ability and administrative efficiency that characterized the President Abadi during the past four years, and the gains, achieved in the light of presence of corruptions and remnants of previous political systems and administrations .But this bloc will not exceed 55 seats. Therefore, if Abadi wanted to return to the premiership, he should seek a number of alliances with other blocs, which would be sufficient to achieve the parliamentary majority. The question that arises in this context is related to which choices al-Abadi will decide to go? To the Iranian-affiliated blocs, or those independent from the Iranian influence, or hostile to it? This will reveal clearly the extent of US and Iranian influence in Iraq.