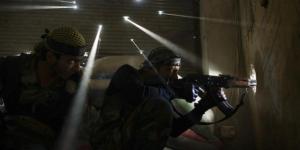 By Dennis Ross
Dennis Ross, a counselor at the Washington Institute for Near East Policy, was a special assistant to President Obama from 2009 to 2011.
It should come as no surprise that the Obama administration continues to wrestle with its approach to Syria. There are no good options in a war that has claimed 200,000 lives and displaced nearly 10 million people. The president is right to say that there are no magic solutions, yet he also clearly understands that avoidance is not an alternative if we are to achieve his declared objective of degrading and eventually destroying the Islamic State. Leaving the terrorist group with a haven in Syria ensures it both an ability to wreak havoc in Iraq and an operational space from which to plan, recruit and, in time, carry out attacks worldwide.
Every option, however, also presents us with dilemmas. Already, our bombing of Islamic State targets in Syria has freed the Assad regime to intensify its bombardment of the non-Islamic State opposition. As these forces see our attacks against the Islamic State making them pay a price, we are alienating the very groups we hope will replace the Islamic State. But the administration avoids attacking Syrian regime targets at least in part because it fears Iran’s response — not so much in Syria but in Iraq. As one senior administration official told me, if we attack Bashar ­al-Assad’s positions, the Iranians will unleash the Shiite militias against our presence in Iraq.
Surely we must consider the possibility that Iran’s stake in Assad could produce a response. But does that stake supersede the more immediate threat the Islamic State poses to Iran and its proxies in Iraq? Are the Iranians fighting the Islamic State in Iraq as a favor to us? It is hard to believe that Iran would seek to weaken the fight against the Islamic State in Iraq to safeguard Assad.
Still, there is no mistaking that the administration has shied away from attacking Syrian regime targets. When Hisham Melhem of Al Arabiya News wrote this month that the real reason the administration does not hit Assad’s positions is because it would “negatively impact Iran’s posture in the negotiations” on the nuclear issue, he was voicing the views of many in the region.
Here again, we see a dilemma: The reluctance to hit Assad, particularly if motivated by sensitivity to Iranian concerns, feeds the disquiet of our Sunni Arab partners. The Saudis, Emirates and others already fear that any nuclear deal will come at their expense, and they are clearly unsettled by talk of a possible U.S. detente with Iran.
To be sure, a detente would be beneficial if it could change Iran’s posture in the region. Unfortunately, there is very little sign that the Islamic Republic has any such intention; on the contrary, Iranians seem intent on changing the regional balance of power in their favor, with some openly speaking of their preeminent influence in four Arab capitals: Baghdad, Damascus, Beirut and Sana. Such triumphalism deepens Sunni doubts about us — and it is ultimately the Sunnis who matter if the Islamic State is to be defeated.
Put simply, only the Sunnis — the leaders, the tribes, the publics — can discredit the Islamic State. We can’t. Iran and its Shiite militias can’t. And if the Assad regime is allowed to increase its attacks against the non-Islamic State opposition with impunity, and with no meaningful support provided to that opposition, we will not have the Sunnis. Worse, we run the risk that the Islamic State will come to be seen as the protector of the Sunnis.
So we are left with unhappy choices. The administration’s announced effort to train and equip 5,000 opposition forces in Saudi Arabia and elsewhere awaits funding by Congress — and even the vetting process has not begun. There are limits to what can be accomplished by dramatically increasing the CIA’s covert arming program — and recently the very forces the program had been arming were overrun by the Jabhat al-Nusra group, with their weapons either lost or given to fighters in the al-Qaeda affiliate. Our current path in Syria looks largely cynical and clearly risks losing the Sunnis.
Perhaps it is time for the administration to rethink its position on creating a buffer for the Syrian opposition along the Turkish-Syrian border. The buffer could be created by declaring that any Syrian aircraft that flies within 75 miles of the border will be shot down by the Patriot batteries that NATO has deployed along the border. The buffer area would address a variety of needs: Politically, it would give the opposition an area within Syria to organize, coalesce and overcome their differences; militarily, it would provide a base to train in Syria, providing forces there far greater legitimacy; and from a humanitarian standpoint, it would provide a haven at a time when Syrian refugees are being blocked from entering Turkey, Jordan and Lebanon.
In return for creating such a buffer zone, we could insist that Turkey begin to actively partner with us against the Islamic State and allow its bases to be used in the fight. Similarly, we would tell the Saudis, Emirates and Qataris that they must meet the material needs of the refugees and strictly coordinate with us the military training within the buffer zone.
The Iranians, Russians and Assad will not like this option — and could try to raise the costs of pursuing it. But their options are also not great. Does Assad really want to lose his aircraft? As for the Iranians and the Russians, the possibility of increased costs could finally motivate them to seek a political way out of the Syrian conflict.
No option is cost free. But our current path offers little on Syria and may actually undermine our objectives against the Islamic State.
key words:Obama، isis ،syria ، iraq،iran،Sunni ، the Shiite militias
http://www.washingtonpost.com/opinions/the-united-states-has-no-good-options-on-syria/2014/11/21/7faf8e50-70eb-11e4-893f-86bd390a3340_story.html