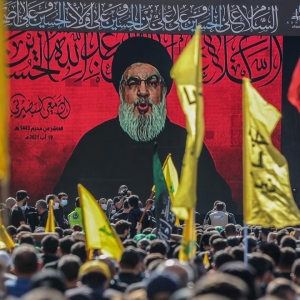 When Lebanese took to the streets in October 2019 to rail against government corruption, a lack of accountability, and runaway consumer prices, they coalesced around the chant “All of them!”—meaning that every political actor in the country held some blame for the national meltdown. But the slogan glossed over the important fact that one group in particular, Hezbollah, deserved the most blame. Since notching a parliamentary majority in 2018, the Iran-backed military-political organization has consistently prioritized its own interests over those of the Lebanese people through practices such as illicit drug production, sex trafficking, and—of course—the buildup of its military arsenal.

In this Policy Note, Hanin Ghaddar, an expert on Lebanon who worked for years as a journalist in the country, explains why Hezbollah poses such a menace and what the international community can do about it. Foremost, she recommends that the United States and its partners intensify pressure on Hezbollah and its Iranian sponsor while simultaneously engaging with a new generation of Lebanese who want to free themselves from the group’s stranglehold.