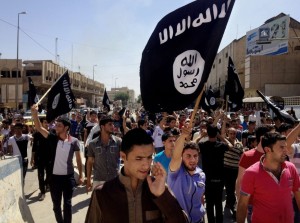 My social research and marketing firm, IIACSS, has conducted intensive, nationwide surveys in Iraq for over a decade, amounting in total to more than one million interviews. Surveys are conducted in person with Iraqis 18 years of age and older, using a probability (random) methodology. Since the advance of the Islamic State into Iraq in 2014, we have conducted additional interviews with tribal and community leaders in areas now under Islamic State control as well random telephone interviews in Mosul after its fall. We conducted four surveys and 10 in-depth interviews in the second half of 2014 to investigate the Islamic State issue in Iraq. Regionally, we have conducted three rounds of face-to-face surveys in Libya and two rounds in Syria consisting of over a thousand interviews each. The basis of our research is fairly substantial and in this respect, arguably unparalleled in Iraq. Our survey results suggest that the Islamic State is ideologically incompatible with the many of the residents of the territory it now occupies, but that it is able to exploit the residents’ deep dissatisfaction with the incumbent government to its advantage.

Despite the Islamic State’s claim to be the true voice of Islam, religion has not been a key factor in its ascent, at least in Iraq. A more important causal factor is likely the deep, profound discontent Sunnis felt with the central Iraqi government. In 2013, popular anger against the treatment of the Sunni population in the Anbar and Tamim (Kirkuk) governorates led to peaceful demonstrations. Just a few days before the Islamic State overran Mosul in June 2014, 91 percent of respondents we surveyed there said that things in Iraq were going “in the wrong direction,” in contrast to the 60 percent of Iraqis overall or 55 percent of Shiites who said the same thing.

Our research does not find comparable religious grievances. Consistently throughout IIACSS research, we have asked all respondents whether religion and government should be centralized in the same authority or whether they should be separated. More than half of respondents, over the past decade of research, believed religion and government should be separated. In other words, the Islamic State’s goal of creating a caliphate and imposing Sharia does not align with the political beliefs of the population under its rule. It is imposing an order that people in these areas largely reject.

If not for religious reasons, do those Iraqis under Islamic State control accept their new overlords because the Islamic State offers higher quality social services or jobs than were previously available to them? Hezbollah in Lebanon and Hamas in Palestine are good examples of this. Both organizations gained significant political support in the past decade for providing social services that governing authorities – whether through indifference or corruption or ineptitude – failed to deliver to citizens. Our research, however, suggests that there has not been a gap in service provision between Shiites and Sunnis. Basic rates of satisfaction with services – such as electricity, drinking water and sewage – are fairly equal between Shiite and Sunni Iraqis. Similarly, there is no major disparity between rates of employment of Sunnis and Shiites in Iraq.

The same is not true for the areas of security and justice, however, where Iraqi Sunnis have felt under-served by the central government. Of Sunni respondents nationwide, 60 percent of them do not trust the judicial system, while only 30 percent of Shiite respondents hold a similar view. One week before Mosul fell to the Islamic State, 80 percent of Sunni respondents in the city said they did not feel safe in their neighborhoods. In an extreme sense, the Islamic State could be considered a solution – if not an ideal one – to these deficiencies. As the following chart shows, over the last four years there was a continuous, and steady decline in feeling of safety among Sunnis versus Shiites who felt safe in their neighborhoods: 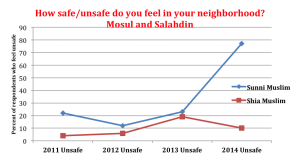 Between 2013 and 2014 – and before the Islamic State’s arrival – our surveys show a 60-point spike among Sunnis who felt unsafe. This spike seemingly resulted from perceived intimidation from Shiite militias in the run up to the 2014 parliamentary elections. The question of how they feel about their personal security today deserves separate inquiry, but it is safe to assume that the core basis of fear has changed with the Islamic State having seized the Iraqi government’s authority in these areas.

Still, those under Islamic State rule in Iraq today would be glad to see the group expelled. In Iraqi provinces predominantly populated by Sunni Muslims, we found that more than 90 percent of residents surveyed view the Islamic State as a terrorist organization and 80 percent of them support an international effort to remove it. Support for an international coalition is likely motivated by a continuing lack of trust in the Iraqi security forces, which already had very low ratings before the Islamic State swept them from five governorates. This lack of trust is paired with a sense that the disproportionate influence of any one country – such as Iran, which many Sunni Iraqis view with tremendous suspicion – could worsen the inequities faced in the past. Iraqi Sunnis today crave balance.

If the apparent willingness to accept an alternative as radical and violent as the Islamic State is based neither on religion nor poverty and lack of services, what factor could account for such a level of public disaffection for their legal government? What our trial-and-error approach finds is the existence of a third basket characterized by a lack of trust in government, deep feelings of injustice and a growing source of alienation that leads, in effect, to the denial of national identity. It might therefore not be surprising that we found a decline in participants saying that they were “Iraqi above all,” falling from 80 percent in 2008 to only 40 percent in 2014.

That’s especially profound for Sunnis, for whom the past decade has been one of steady decline. Prior to the U.S. invasion of Iraq in 2003, Sunnis held many key positions in government and controlled the officer corps of the military. Under U.S. occupation, a policy of “de-Baathification” was broadly applied to disqualify hundreds of thousands of Sunnis from jobs for which they were well qualified. The dominance of religiously oriented Shiite political parties in the Iraqi government following the 2005 elections led to a distribution of spoils that excluded Sunnis. Moreover, the drafting of the new constitution that year – the preamble of which laid the blame for Iraq’s prior woes at the feet of Sunnis – proceeded to give special status to Shiite clergy while institutionalizing de-Baathification.

In the 2010 election, although a secular coalition led by Ayad Allawi won more seats in parliament than the governing coalition of Nouri al-Maliki, post-election bargaining came down in favor of Maliki’s coalition remaining in power. This outcome contributed to a mounting sense of injustice among many Sunnis in Iraqi society. When the Maliki government responded to peaceful Sunni demonstrations in 2013 with violence, it was quite possibly the straw that broke the camel’s back.

Defeating the Islamic State in Iraq requires changing the conditions on the ground beneath their feet. This means addressing the preconditions that led to such little resistance to their arrival. In less than a year, the world has seen the treatment of Iraqis of all faiths under Islamic State “rule.” The destruction of the Mosul museum and of ancient Assyrian sites strikes at the remaining fiber of Iraqi national identity just as the destruction of the Askari mosque in Samara in 2006 set sectarian tensions ablaze. For Iraqis to stand together and repel the Islamic State from their country, they need a reason to believe that things will not return to an unacceptable status quo. In practical terms, this means serious reform of the security and judicial sectors of the Iraqi government and a realistic path to national identity that includes all Iraqis.

Munqith al-Dagher is the founder and president of IIACSS, Iraq’s leading social research and marketing firm. His research has been cited and studied, helping to inform decision-makers throughout the Arab word.