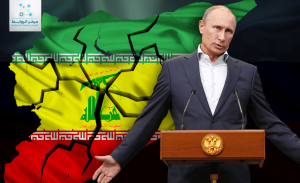 Many believe that the essence of the growing Russian military intervention in Syria now aims eventually to establish a system’s efforts to preserve what Iran calls “useful Syria l”, which prevents its fall in any way, and includes the Syrian coast, Damascus and Homs. From here, Some explains that the the growing Russian presence in the coast region is an attempt by Moscow, to implement this project on one hand, and to balance the Iranian presence on the other hand, in an anticipation of probability of the success of the divisional project.

It seems that the Russians have begun to feel after a support the system for more than four years and the payment a large sums of money, they have lost much of their influence in Syria in favor of Iran which now controls all state facilities and even on the political decisions related to a political solution to serve their interests in the region. This means that Russia has lost its ability to impose a political settlement according to the Geneva statement based on the political transition without pillars of the regime .This Russian concern has prompted Moscow to think of a new mentality that is an expansion in Syria through invent the idea of forming an alliance to fight against the “Islamic State” (Daash) and eliminate it, but to start moving from the areas controlled by the system. And that is an attempt by Russia to give an international legitimacy to its intervention in Syria from the gate “fight against terrorism”. In the context of the rapid field developments , we wonder about the considerations of the Russian intervention in Syria and its future impact on the interests of Iran and its ally Hezbollah in Syria

The states which acted on the ground and believe since the early period that the rule of Syrian President Bashar al-Assad has been ended were not the United States , Russia and «Friends of the Syrian people» as the United States and Russia have agreed since mid-2012 on the transition phase and the rule of the opposition and pro-government to maintain the state institutions to prevent a repeat of the experience of Iraq after the US occupation to it in 2003. They did not think seriously about what is behind the governmental institutions . Moscow was using the Syrian crisis to adjust its lose in the Middle East after Iraq and Libya, and to enhance its position on the ladder of international powers, while Washington does not want complete chaos in the rest of Syria and is pressing to Syrian President Bashar al-Assad to give up key files, especially chemical arsenal, then later on , it has no objection to follow up the jihadists who are fighting «Hezbollah» on Syrian territory for another ten years, and the pressure on Iran in the nuclear negotiations, as long as the Syrian crisis is contained within the borders »

Iranian project was elsewhere. Tehran’s strategy also was in another track. After the outbreak of the «Arab Spring» and the arrival of winds to Damascus, Iran put all its security and military, political and economic capabilities to prevent the arrival of fields infection to Syria starting from « Alsaah square » in Homs in the center of the country, but they were aware that the system ended up structurally, and must be there a new system , new geography and a new social contract between the regime and geography and demography

The vision is clear and the tools were existed. All its allies in Iraq, Syria and Lebanon returned to the traditional post in the Iranian project. Engagement without gloves .Iran began to work quietly to establish the «shadow system» includes a lot of security, military, economic, social and political institutions. Perhaps one of the main tools are militias which are in afar distance from the authority of center as in the case of other countries. Copies of the Iranian Revolutionary Guards experience «Basij», and founded the «national defense forces» to be under the direct influence of Iran to be trained in Iran and provided with funding and the presence of guides in several regions of Syria. It is believed that the number of fighters of the (defense forces) is about a hundred thousand fighters