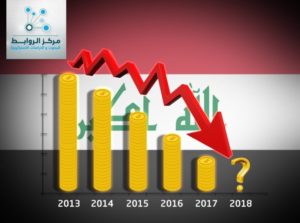 The world countries have become certain  as a result of its long experience at  the  management of  its overhaul  economy  that there is no  exit  of the cycle of poverty, and  the advancement of joints of the national economy and make the economic and social development plans and programs into practice only through the expansion of public revenue collection by the development of traditional sources of revenue, and find new sources  to the supplement of treasury .
But the economic situation in Iraq is going in the opposite direction of development; it is suffering a great danger, due to the lack of diversity of sources of revenue, and lower cash reserves with the central bank ‘s foreign currency to levels low, as it was in the month of September 2016 about $ 52 billion, while amounted  the total 68 billion dollars in the same month of 2015, a decline of $ 16 billion, representing a decrease of 23.5% over the year.

Sources said that the decline  of this year reached  to $ 50  billion  indicating  that among  the reasons  of  the continuity of  the dangerous economic situation  in Iraq is the protection  of the corruption   covered by the corrupted class of the politicians  and rulers  and those who are linked to them from their  officials , parties  and control systems  and competent commissions of integrity and inspection  ,judiciary or the courts that belong to the influential  political class  and their followers who are under their pressure  and interventions .
Economists said the size of the reserve is an  expression of the sovereign credit of the state and cover the local currency and a decreasing which  means  the  lower of the  value of local currency, and that the  operation  of  the sale  of the foreign currency by the  Iraqi Central Bank  caused a drain and a waste of the wealth of Iraq, as the low  cash reserve of currency  reached  to the low levels  threatened  for  the serious disasters in the long  and the short term , and threatens Iraq  to the bankruptcy ,  and sinking with the  foreign debt , and economic dependency.
the national coalition led by Iyad Allawi, criticized  the auction of the currency, saying: ” The management of  prices  of   dollar exchange  in the domestic market  are the  window of the corrupts who are living on the difference between the official exchange rate with the parallel markets.”
He said that the so – called “currency auction” is: ” the practice does not exist in the countries that adopt a market economy, and proved experimentally that they lead to a waste of money without supervision.”

This is because the difference between  the price adopted  in the local market with the price in  central bank allows the spoilers, and  their supporters  from  depriving the government of tax and  customs , in addition to depriving the Iraqi people to take advantage of the real exchange rate.
At the opposite context ,the politicians, and the IMF says: “The inventories (central bank reserves) is assured at the moment because it covers  imports”, but the economic reality is that if the  declining  of reserves  continue with a low level of oil prices, the situation would  not  be  assuring; because Iraqi dinar exchange  price is low  for its association with the political and security stability.

Regarding the security situation  , the state and military and security forces and the popular crowed  are still  fighting against Daesh  with all its power  and managed to retake  a large distances from  the occupied  territories  that demands  a continuous spending  for the battle  and in addition  the impact of internal displacement  noting that works and workshops   of a lot of Iraqis have been stopped   and forced  to the internal and external immigration   and transfer the assets  to the foreign currency  with a limitation of $ 10 thousand   ,  and this limitation  amount is allowed   according to the  Anti-money laundering law and this is in turn  will increase the demand on dollar in the black market.
According to a finance ministry official , “the Central Bank and the presidency of the Iraqi Council of Ministers are keen not to disclose official reports, during the recent period, because of the  disturbing and large decline   in Iraq ‘s reserves of hard currency”, noting that it amounting to 52 billion dollars currently, after the government ‘s borrowing large amounts  from  the international Monetary Fund , World Bank without return it , and the loans were aimed at financing the purchase of weapons and ammunition deals for the Army , and pay staff salaries and members of the armed forces and militias popular crowd.
And the auction of the daily  sale of   currency by the central bank   was not carried out   without suspicions of price manipulation , which sells it with the price in the market and this has been proved by official documents uncovered by the RawabetCenter   for Research and Strategic Studies  in previous studies.
The Governor of the Central Bank: “Iraq reserves from  currency is low , but in line with international standards and regulations of the International Monetary Fund, demonstrating the adequacy of the reserve in accordance with the international standard of the existence of the amount of foreign exchange to cover of the size of  local currency of dinar ,” At the same time  the governor of the Central Bank   said that the House of Representatives and the government responsible for the low reserve because  their approval  on the financial budget with  deficit, as the size of the reserve is an  expression of the sovereign credit of the state and cover the local currency and a decreasing mean lower value of local currency.
The Central Bank of Iraq  refused  on 13 / January / 2016, the government  endeavor  to withdraw from the financial reserve; because the law “does not allow” the government of this, calling for the issuance of bonds and sell them to banks.
The bank warned that the  cover of  the  general budget deficit with  vouchers or bonds without a  enough  cover  from the foreign currency is negatively affects the Iraqi economy.
The International Monetary Fund approved at the same time on  the Iraqi special government programs to  fund  the federal budget deficit from its reserves of hard currency as a precondition for lending the government, noting that it will lead to a reduction of these reserves to less than $ 43 billion, down from three years was to exceed  by $ 80 billion  .
The ongoing Iraq face of lower oil prices and the budget deficit due to falling oil revenues. Which leads to a decline in foreign exchange reserves, has led to the economic and financial crisis is difficult.

Specialists  in  Iraqi  economic and financial affairs   said  that the reason of financial crisis n and the continuation of  the decline of oil prices in the global markets and dependence on the  cash reserves  to cover the  the financial deficit  occurred in the general balance  of the state  and funding the operating expenses will affect directly  on the general situation of the country  causing a permanent deficit  in the budget  and the    austerity exhausted  of the citizen  and id the position continues in this way , it will lead  to inability the government  to pay salaries  of its staff in future and this is a an economic disaster .
The decline in reserves at the Central Bank of Iraq  led to a decline in the value of the dinar against the dollar in  the trading of  Iraqi  stocks of   banking and financial   arrived at 1331 dinars to the dollar after it was over more than a year between the stable (1230-1290) dinars to the dollar.
The parliamentary Finance Committee  acknowledged  with  a decline in the size of the cash reserve to Iraq of hard currency after the depletion of $ 30 billion by the economic crisis, and  slow , corruption and routine administrative procedures of government agencies and corruption in the collection of those revenues and deposit it in  the state treasury that impacted negatively on the economy of Iraq.
To counter the decline in reserves at the Central Bank of Iraq , the State must take serious steps to maximize resources and reduce its dependence on oil revenues only, and the development of the productive sectors (agricultural, industrial and tourism); as the fluctuating oil prices led to a worsening of the financial crisis in Iraq.

Statics say  that the revenues of Iraq from oil  amount by 95%  while it amount by 5% of internal revenues  and this is unbalanced state economically   as the usual  state of the balanced  economy   can be achieved  by the equality  of internal and external revenues .
The government also needs to develop a clear and comprehensive and sustainable plan to reform its finances, and Iraqi Prime Minister Haider al – Abadi, Minister of Finance and the Governor of the Central Bank realize that they need to take difficult decisions and  the big loan will come  from the IMF on  conditions related to economic policy , including the steps taken by Baghdad to cut energy subsidies and reform the companies  owned by the State  ,  steps which may be politically difficult.
As Iraq can succeed also as  succeeded in conditions experienced    and overcome it and these are    harder than what is  going on to day, if there is  a  good will and proper management .